Development & History of Irish Flags Pt3 Origins of the harp

Origins and Early Use

Arguably the best symbol of Ireland and one of its most recognisable is the harp. But when exactly did it become an Irish symbol and why? It is true the harp was popular in ancient Irish music and often associated with the island. However the harp was also widely used in neighbouring Scotland, and was also the national instrument of that country before it was replaced by the bagpipes. (Or the Great Highland bagpipes to be exact as their are also versions of the pipes native to Ireland). 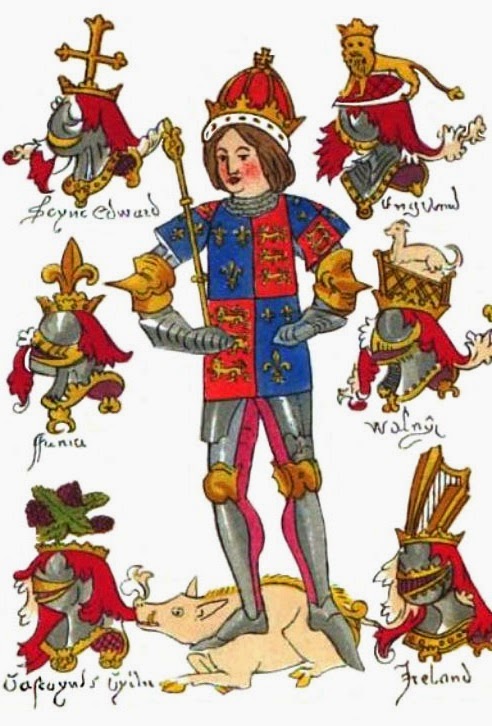 It could have religious connections? The harp was an instrument often played by King David of Israel, and is often associated with him before becoming King about 1000 years BC.  1 Samuel 16.23 says "Whenever the spirit from God came upon Saul, David would take his harp and play. Then relief would come to Saul; he would feel better, and the evil spirit would leave him." This is an image reproduced on some Irish Celtic crosses. However if (emphasise if) this is the origin of the harp it seems odd to pick a symbol of David the servant of Saul rather than David the monarch. There are also stories of Henry VIII being given the gift of a harp by the pope. One way or another it became the main part of the coat of arms of the Kingdom of Ireland (left). It is believed that the harp was officially adopted from the three crowns after the Lordship of Ireland became a Kingdom in 1542. However as already mentioned in Part 2, there is evidence of the three crowns still in some use as late as the region of Elizabeth I. Likewise there is also evidence of the harp being a symbol of Ireland as early as the late fifteenth century , a depiction of the crests of Richard III (above right), depicts a harp for Ireland. Why Henry VIII chose the harp is not clear but perhaps the most likely explanation is he didn't want the three crowns mistaken for the papal tiara, especially at a time when he broke from Rome and founded the Church of England (and subsequently the Church of Ireland too).  A crowned harp was a common symbol for Ireland in the Tudor and early Steward periods, often complementing the cross of St George in the headings of maps of the Island. During Henry VIII's time the harp also started to appear on Irish coins, something that still happens today with the harp appearing on many One Euro coins. Another interesting Tudor coin is one minted during the reign of Elizabeth I which shows a shield with three harps!

The coat of arms of Ireland

Although it was Henry VIII who was first to use the title King of Ireland, it was not until the succession of King James VI of Scotland to the English and Irish thrones in 1603 becoming James I of England and Ireland, that an Irish device appeared on the royal coat of arms. James quartered his shield with the arms of his three kingdoms. This principle is still used for the British Royal Arms today. In the third quarter of his arms is the harp proudly representing Ireland. This is probably what secured the harp as the main heraldic symbol of Ireland. (it is also worth noting that the harp on blue field is the only part of the royal coat of arms that has remained unchanged since 1603!)
The harp was adopted as the emblem of the Irish Free State  when it became independent of the United Kingdom in 1922. It was registered as the national coat of arms by the Chief Herald of Ireland in 1945. Perhaps its greatest testament is that it is still the heraldic emblem of Ireland and is used in both the arms of the Irish Republic and representing Northern Ireland in the arms of the United Kingdom: 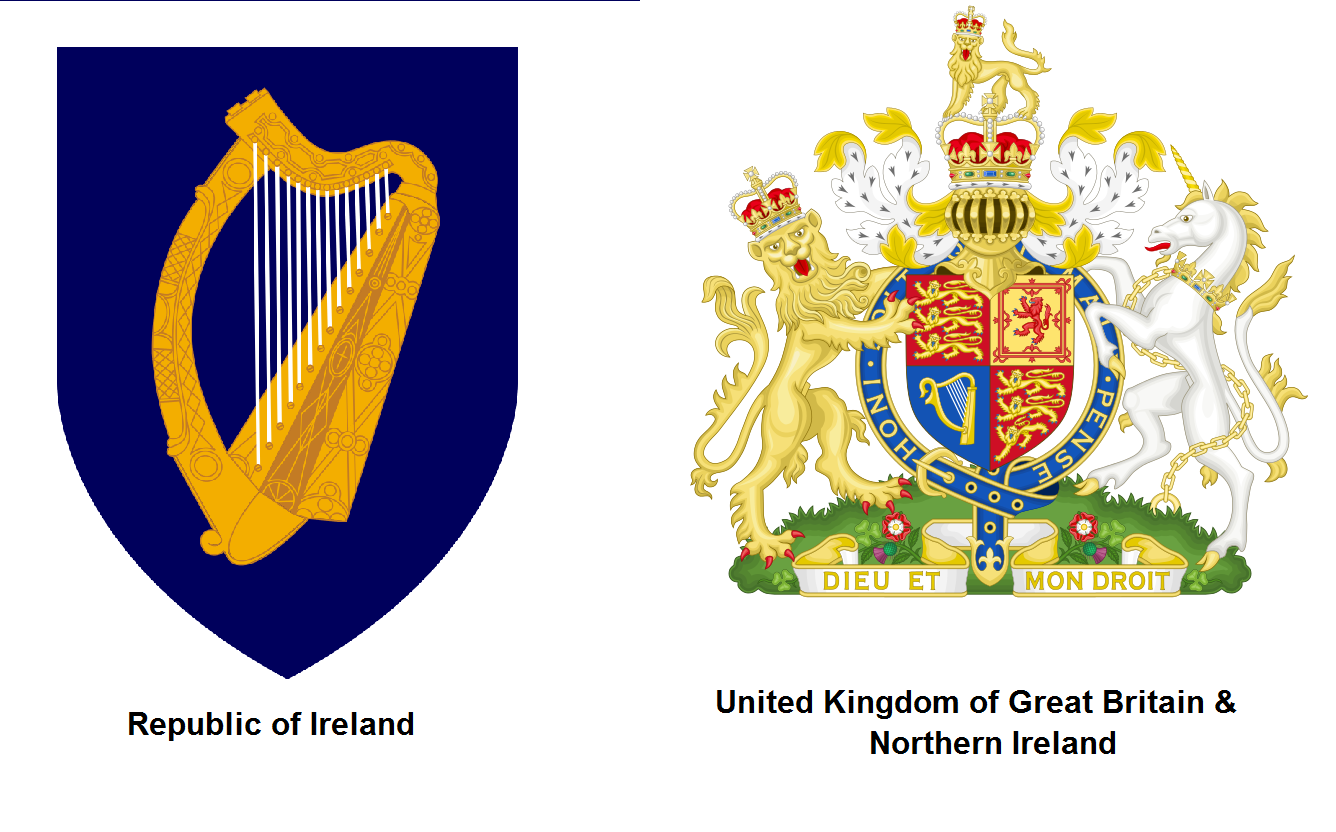 Decorations of the Harp

The Irish harp appears in two main forms, that of a winged female pillar, and one with a more plain pillar. The early harps of Henry VIII are plain harps, however throughout the sixteenth and seventeenth centuries various figures have been represented on the harp pillars. Early figures include a beast, with the a dog or fish like head, which the late Professor G A Hayes-McCoy suggested may symbolise the beast figure or 'Onchu' mentioned in part 1. Thankfully the female figure which appears to have developed at around the same time has rendered the others redundant, making the harp rather more artistically pleasing to the eye. However throughout this the plain version of the harp has survived, and both versions are regarded as the same thing from a heraldic point of view. The female figure may have its origins from Irish mythology, where the sovereignty of Ireland is described as being symbolised by a female figure dressed in blue. It is also notable that the winged 'Made of Erin' figure is rather similar in style with that of a ship's figure head. The plain version is that preferred by HM Queen Elizabeth II on her coat of arms, although the 'Made of Erin' version is also common on royal standards. The arms of the Republic are based on one of the oldest Irish harps resident in Trinity College Dublin, known as the Brian Boru Harp, which dates from 14th or 5th century. It is the most common version of the harp symbol in the republic although the Made of Erin can often still be found. 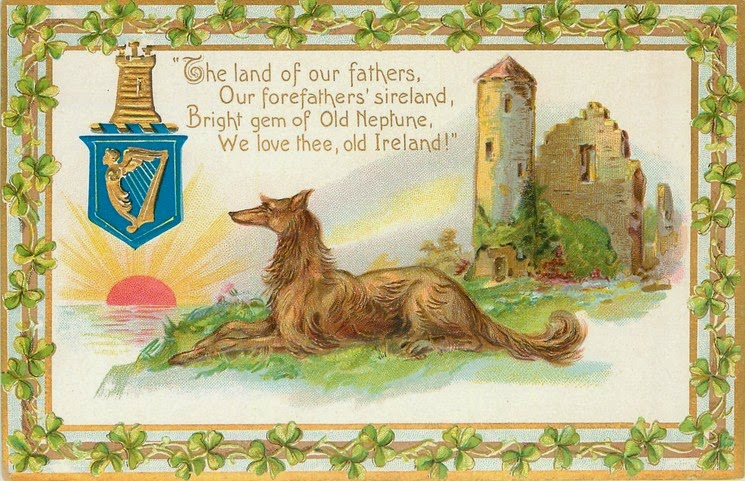 The arms of the Kingdom of Ireland did have a crest (Top Left picture) and is mentioned in part 2. It was a white stag coming out of a castle or tower with three turrets. However this crest was seldom used, as topping the arms with a crown seems to have been preferred. Although there are some examples of the crest in use. A late Victorian St Patricks Day greeting card from the USA depicts a tower crest but the stag appears to be absent. The crest was ceased to be official after Act of Union of 1801, when the UK arms represented Ireland. Upon gaining independence the crest was not readopted by the Irish Free State. Unfortunately unlike Scotland, Ireland was never granted its own unique version of the UK arms, if it had then the crest of Ireland might have survived to this day. 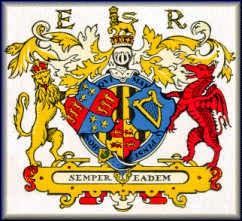 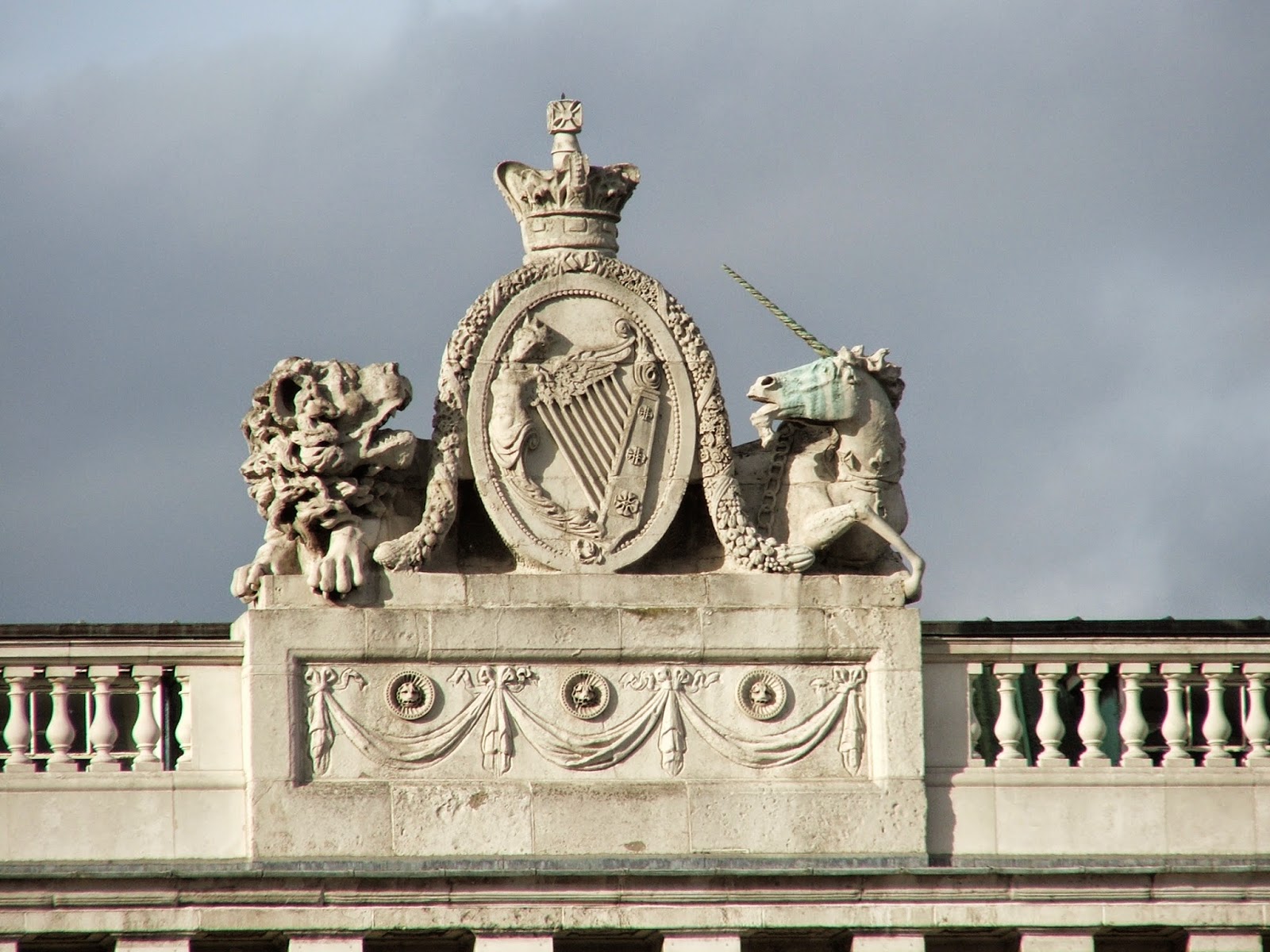 Officially the arms of Ireland is and was always without a motto or supporters. However various supporters have been used unofficially throughout history. A notable picture showing the realms of Elizabeth I depicts the arms of England, Ireland and Wales flanked by a lion and dragon, representing England and Wales. Likewise on the Union of the Crowns under James I, the supporters on the royal coat of arms were a lion and unicorn, representing England and Scotland. Although the British royal arms were not used in Ireland until the act of Union in 1800, prior to that Ireland had used the harp only. However the arms often appear with the British supporters, the coat of arms on the old Custom house in Dublin show the harp flanked by a lion and unicorn. Sometimes the shield is even accompanied by the Order of the Garter, despite Ireland having its own separate chivalric order the Order of St Patrick. Mottos also appear with Irish arms despite none being officially granted. The most common are "Dieu Et Mon Droit" (God is my Right reference to monarchs being appointed by God) the motto of the UK royal coat of arms, and Quis separabit? (who shall separate us?) the motto of the order of St Patrick and various Irish regiments, was also used on the old Northern Ireland coat of arms. Other less common mottos are "Erin Go Bragh" (Ireland Forever) and "It is new stung and shall be heard" the motto of the United Irishmen, although the latter was used more on seals and flags rather than coats of arms.

The banner of Ireland has since the formal adoption of the harp on blue field, been a blue flag with a harp. To this day it appears on the lower quarter of the Royal Standard by the hoist and is used as the standard of the Irish President. Originally it would have been a royal banner, however there is no evidence of it ever being used. In fact the English and later British royal banners appear to have been used anytime the monarch visited the island.  However the harp on a blue field does appear on other flags. It was used on flags during the Interregnum Period (1649-1653) when Oliver Cromwell deposed the monarchy and ruled as 'Lord Protector.' On 5 March 1649 the ruling military Council ordered "that the Flagg that is to be borne by the Admiral, Vice-Admiral, and Rere-Admiral be that now presented, viz., the Armes of England [Red St. George Cross on white] and Ireland [gold harp on blue] in two severall Escotcheons in a Red Flagg, within a compartment." A similar flag consisting of the St George Cross and Irish Harp was used as the naval jack.
It even defaced the Union Flag as the Naval Jack between 1658 1660: 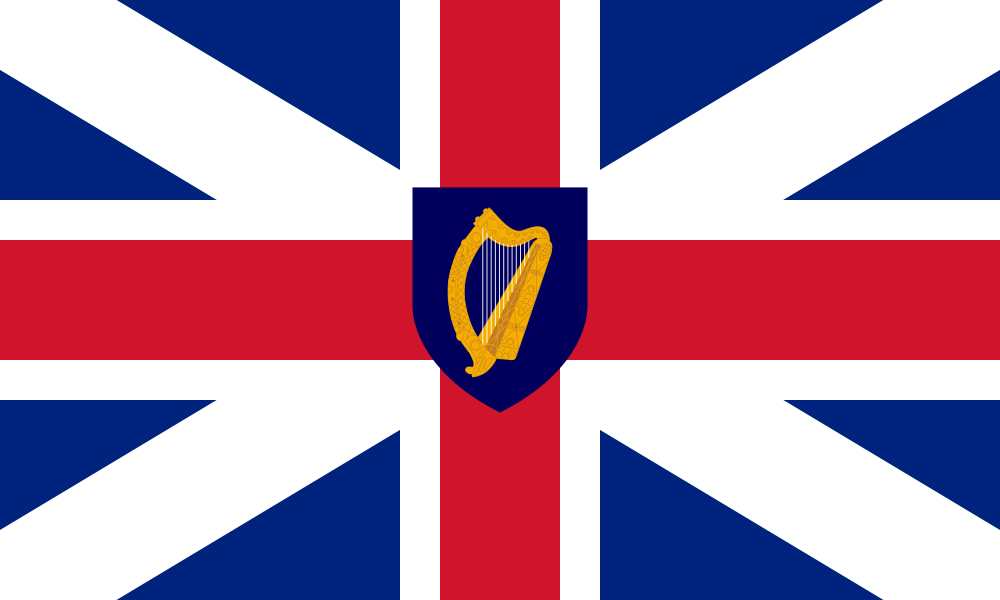 This flag is interesting for using the harp rather than St Patrick's Saltire. The only other Union Flag to have a harp was the flag of the Lord Lieutenant of Ireland from 1801 - 1921: 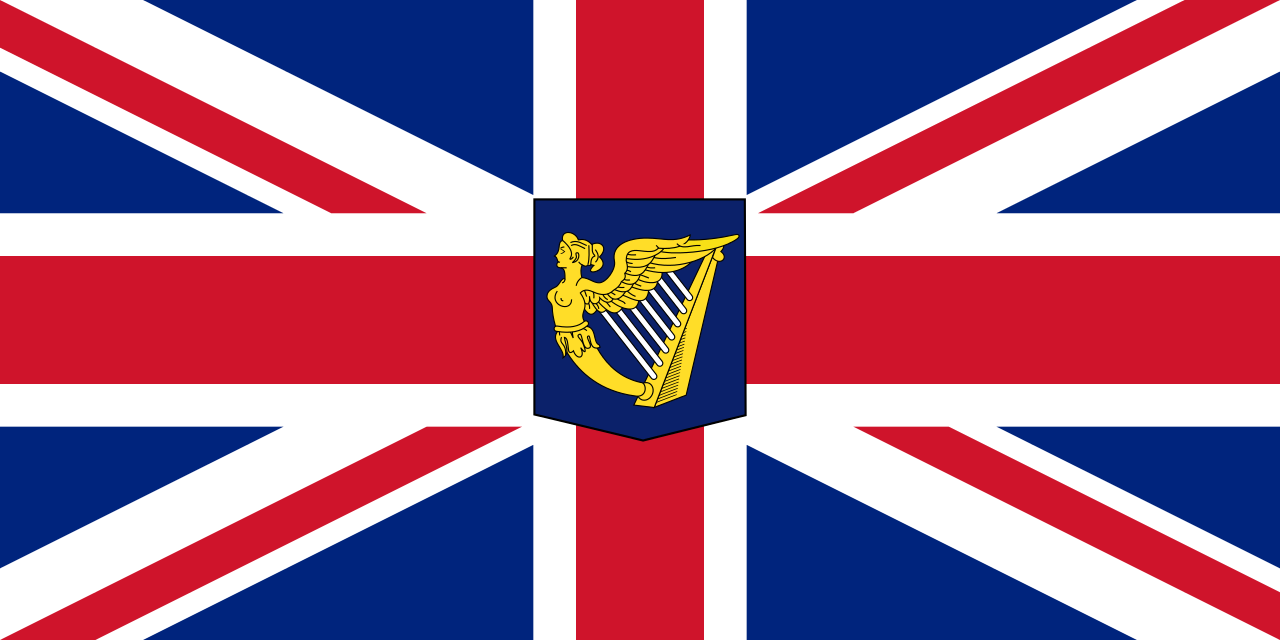 The blue harp flag was later adopted by the Irish president. There is however some evidence that it may havr been used in the role of a national or sub national flag. There are various interpretations of blue harp flags in cultural art and heraldry. In the Guildhall of Londonderry there is a fantastic sculpture of the city coat of arms flanked by various flags one of which is blue with a gold harp. On The old Northern Ireland coat of arms one of the supporters bears a blue flag with a crowned harp, The burgee of the Royal Irish Yacht club is also blue and features a crowned harp.
The Banner of Ireland today is used as the presidential standard and included in the royal standard in Northern Ireland:
The harp on the blue field is even used on the tail of Ireland's most successful commercial airline: 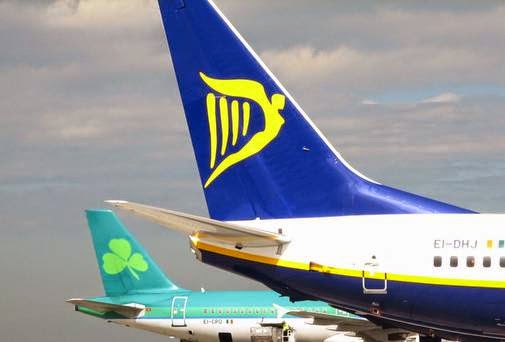 Other chapters in the series are: