The Anglo-Normans came to Ireland at the end of the Twelfth Century, introducing various things that had never been seen on the island before, such as armour, stone castles and heraldry. (Heraldry is basically all things to do with coats of arms see here for more information.)  Heraldry appeared in Ireland in the Thirteenth Century, and by the late middle ages had become a complicated system used by every nation in Western Europe. Along with heraldry came heraldic flags notably banners and standards, the fore-runners of modern vexillology. Although the Normans had borne flags before the done of heraldry. Most notable is the one given by the pope to William the Conquer for his conquest of England in 1066 (above right), it is probably from flags like these that heraldic flags grew out of. 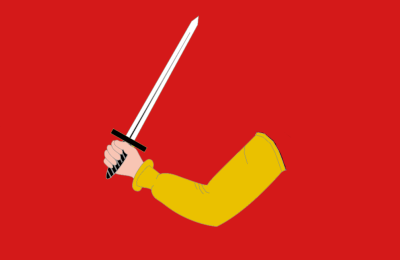 The Anglo Irish Normans soon began making heraldic flags, we know that in 1288 two red cloth, silk and satin banners and standards were made in Ross Co Wexford for the use by the King's soldiers.
Heraldry was adopted by the Gaelic Irish too, perhaps one such example is the red flag of the O'Brien's of Thomond, born in battle against the Clares who had been given the title Lord of Thomond by the Lord of Ireland (King of England). The Office of Chief Herald of Ireland, describes the early arms of the O'Brien's as being a red field with an arm holding a sword. 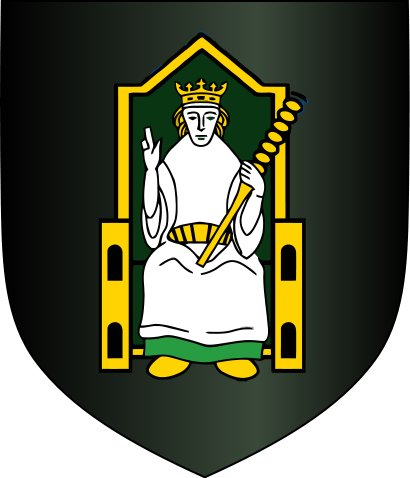 The modern coat of arms of Ireland is the harp on a blue field (used in both the arms of the Republic of Ireland, United Kingdom and even Canada), and while harps were used as an Irish symbol in this period it was not the only one.
There was a device of a King seated on a throne, although the exact form seems to differ depending on the source, but most French and Spanish rolls of arms depict the King figure holding a sceptre in one hand and a lilly in the other. This is believed to be the arms of the ancient province of Meath . Another is golden shield bearing a black lion rampant. the lion in the canton of the Burke arms (who's red cross is also in the flag of Ulster) may be a reference to this. 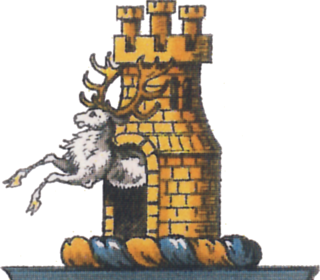 Another most intriguing variation of the royal arms of Ireland describe a red shield, with a silver castle or tower, with an open gate, from which a hart (deer) was charging out. The hart was in its natural colours but it horns (by which the writer must have meant antlers) were gold. The seldom used crest of Ireland (left) may have its origins from these arms. Although not identical there is quite a similarity. Although it is accepted that the white hart is borrowed from the personal emblem of King Richard II.
Another description describes the Irish arms as a shield divided down the middle into two gold and red fields, in the first half is a spread eagle in the other a dagger. The description of this bears a remarkable resemblance to the arms of the province of Connaught. 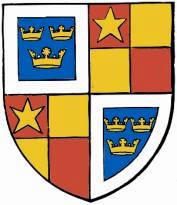 Of all the coats of arms of Ireland (or at least the area's of the island under the Lordship of Ireland) the three crown device is the most prominent. These golden crowns appear on a blue field either one above the other, or in a triangle. They may be of Norman origin. Richard II granted these arms to Robert de Vere (right) "so long as he should be Duke of Ireland" in 1386. They also appear on Irish coinage of the medieval period. They were apparently borne as the arms of Ireland in the funeral of Henry V in 1413. It is a popular belief in the world of both  vexillology and heraldry, that the three crowns were the arms of the Lordship of Ireland, and when Henry VIII turned Ireland into a kingdom the harp became the royal emblem. This however does not seem to be the entire case as Harps were in use earlier, and the three crowns continued to be used as an emblem for Ireland right up to the time of Elizabeth I. A design of a royal seal of Ireland in 1584 features a shield bearing three crowns (below left) and one bearing a harp, between which the virgin queen herself is seated. 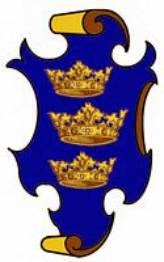 It appears that these three crowns were adopted as the arms of Munster. The origins are uncertain and links have been suggested with the three wise men who visited the infant Jesus from Mathews Gospel and even the legend of King Arthur. It should be noted that the three crowns are not unique to Ireland and feature on the current Royal Arms of Sweden.  It is from heraldry  and the flags and banners that were the forerunners of modern flags, that Ireland would get what is arguably the island's greatest symbols some of which are still in use today.