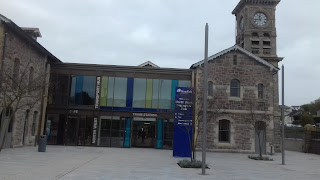 The long awaited new railway station in Londonderry has arrived. I say new station however that new station in in the Victorian building which housed the station that was replaced by the station which the new station has replaced. Confused yet? Then I'll briefly explain the history.
The railway history of Londonderry is quite long as you would expect for a city that once boasted four termini plus extensive docks railways, so I am only focusing in on one station.

The Londonderry & Coleraine Railway Company (L&CR) opened its first station in Londonderry's waterside area in December 1852, although the line would no be completed until July the following year (until then trains from Derry terminated at Limavady Junction).
Around this time there were other railway lines being founded in Ulster. The Ballymena, Ballymoney, Coleraine & Portrush Junction (BBC&PJ) Railway being the  L&CR's closest neighbour at the Coleraine end, who in 1859 built a bridge over the River Bann to link to the L&CR station in Coleraine. in 1860 The Belfast & Ballymena Railway merged with the BBC&PJ to form the Belfast & Northern Counties Railway (BNCR). By 1871 the BNCR had bought the L&CR giving trains from Londonderry the ability to run to Belfast and Portrush as well as the places in between which is more or less the system operated today. The BNCR rebuilt the L&CR Londonderry Waterside terminus in 1874 commissioning John Lanyon to build an impressive dressed Sandstone structure and that company's initials are still carved into the clock tower. No known records of the original L&CR station survive
The station included a booking hall, waiting rooms and offices with a large indoor platform area with two platforms and a "run around" in the centre. There was also a goods yard, turntable and water crane facilities to top up the tenders and tanks of steam locomotives (in later years diesel storage tanks would also be include). The station also included living accommodation for staff. Plus a duel gauge railway that linked it to the city's other three termini and the docks via the lower deck of the Carlise Bridge over the River Foyle. It was quite an extensive site considering it was at the bottom of a hill sandwiched between the buildings of the waterside and river.
The station and the railway it served would change ownership many times. Operating under the titile of Northern Counties Committee under the Midland Railway, London Midland & Scottish Railway and UK Railway Executive, until the Northern Ireland government purchased the NCC in 1948 and running it through the Ulster Transport Authority and from 1967 through Northern Ireland Railways which is currently a subsidiarity of  the government owned Northern Ireland Transport Holding Company which trades under the brand of Translink.
The station continued in use as Londonderry Waterside station. It was at a somewhat disadvantage to Derry's other stations as it was on the Waterside (east bank of the river), whereas the other mainline terminus Londonderry Foyle Road was on the City Side (west bank of the river) and was hence more convenient to both the city centre and the docks.  The narrow gauge station of Londonderry Victoria Raod was also on the waterside but even this was right beside the rail wagon exchange of the Craigavon Bridge (which replaced the Carlise Bridge in 1933, and is still in use although the lower deck is now used by road vehicles) However despite this it managed to out live the other termini in Londonderry to become the city's sole railway station. Although after the closures of the other stations the Waterside suffix was dropped from the station's name it continues to be known locally as the Waterside Station, other local names for it have been the Midland Station and the Northern Counties Station in reference to the companies which operated it.
The station was targeted twice by terrorists during the troubles being bombed in 1972 and again in 1975. While damage suffered from the first bomb was relatively light although it destroyed the tea room, the station was not so lucky after the second bomb. It would eventually prompt its abandonment and closure. It destroyed much of the entrance and centre of the building including the staff accommodation and Ticket Office and Waiting Rooms following this tickets had to be purchased from a shed at the end of the platform. The last resident of the accommodation at waterside station was North West Manager Alec Esdale, living quarters would never again feature in any of Derry's railway stations.

A new station was opened next to the old in 1980. The old station was fully enclosed and used for storage for some years before being sold by the railway. Since then it mostly lay empty although it did have brief periods of use. I remember it being used as a furniture shop. During this time the platforms were filled in with concrete.
The new station featured an island platform at the end of a square building which included a ticket office and small waiting room. It was very much a station built to reflect the decline of the railway and although there were a couple of sidings the track capacity was very much reduced. The people of Londonderry were never really satisfied with the station. Although it might have been apt for the dwindling passenger numbers when it was built, it was very much a cold looking and functional building, with next to no attractive features, with many saying the platform canopy resembled an upside down egg box. Hardly a befitting way to enter Northern Ireland's Second City!
Although unattractive as it was it served the city and the railway as well as it was designed to until traffic on the line once again began to pick up with the dawn of the new millennium. With growing public, political and infrastructure pressure Translink upgraded the line, some sections of track were upgraded with continuous welded rail in 2013, later a passing loop was added at Bellarena the next station from Derry to enable an hourly service in each direction. Before that at Londonderry if you missed the train you would have to wait at least two hours.
The net phase was a station refurbishment. Translink gave the public a choice. They could refurbish the 1980s building, repurchase and renovate the old Victorian station or build a new station further up the line by the relatively new foot bridge over the Foyle known as the peace bridge. In fairness from an operational view the latter might have been preferable giving closer and more convenient access to the city centre and the Translink bus depot via the Peace Bridge.
However in the consultation the people of Londonderry (myself included) voted by about 60% to renovate the old waterside station. That renovation began in 2018 and as well as renovating the Victorian building included track and signalling work and building new platforms. There are two platforms which unlike the original station are completely outside one running down the side of the building. They are much longer than the previous station with the intention to cater to longer trains not just NI Railways trains but also steam train excursions and rail tours like the Belmond Grand Hibernian. The track includes a run around which should help facilitate these trains. A tea room has returned to the building as well as a shop. The waiting area is spacious and artistic, with reminders of the city's railway heritage and local points of interest.


The old 1980s station is set to be demolished and form part of the road area of the station which is not only to serve as a train station but a regional "Transport Hub" with bus connections too.
While it might not be a restoration it is certainly a new lease of life and one that sees the building serving as a railway station which is the function it was built for

Posted by Sam McKittrick at 10:58 No comments: