Illinois is a state in the Midwest region of the United States of America. It was the 21st state to join the Union and is the 5th largest American state in terms of population. Like many US state flags the flag of Illinois is "Seal on a bedsheet" (SOAB) design, a plain field with the state seal in the centre. Hardly an inspiring flag for such a large state. Plus the seal emulates the Great Seal of the United States  rather than contain any regional or local symbolism.
Although the Illinois flag stands out from the other state flags because its white rather than a blue flag, its still not all inspiring. Infact I recently read an article suggesting an alternate proposal:

There is no doubt that this flag is far better than the current one, I like the symbolism described in the article but not the actual symbols. I think this new flag looks like its from the Anglican church in the USA. I designed a different flag based on similar symbolism: 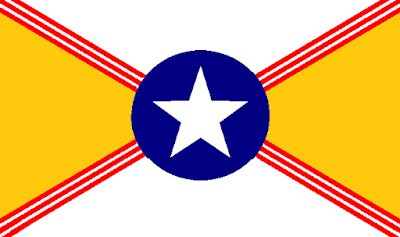 Its got blue in it to represent Lake Michigan, Three red stripes on the saltire to represent Northern ,Central and Southern Illinois, with the star representing the state in its entirety. The five points of the star representing the five nations or entities Illinois belonged to before it became its own entity in 1809: France, Great Britain, Virginia, Northwest Territory and Indiana. The four separate elements in the field can continue to represent milestone in the history of the state; it becoming a state in 1818, the incorporation of Chicago in 1833, The election of Abraham Lincoln to the US Presidency in 1860 and becoming the first state to ratify the thirteenth amendment to the US constitution (the abolition of slavery) in 1865. Red representing the the blood of the indigenous people of Illinois and gold symbolising the prairie and agricultural wealth of the state, with white representing the French colonists who pioneered European settlement in the region. (a white flag often used as the flag of the Kingdom of France). The design of the star and saltire is inspired by the flag of the United States, and makes the flag stand out from the other American State flags.