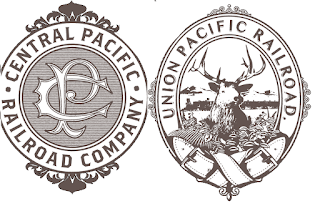 As anniversaries go the 150th is a pretty significant and as a railway enthusiast today's anniversary of the completion of the first transcontinental railway is particularly so.
For an American this should be a significant occasion for the provision of not only a safe, reliable and quick overland route connecting the east and west coasts of the country not only helped advance industry, business and economy but it helped unite the country socially and culturally and thus helped forge a national identity.

The story of Transcontinental railway is that of two companies racing to connect the east and west by rail. In the east building west from California was the the Central Pacific Railroad and in the east building west from Nebraska was the Union Pacific. Both companies faced challenging conditions both from natural obstacles such as deserts and mountains as well as opposition from hostile groups such as bandits, gunmen and most significantly Native Americans whose way of life the railway threatened. Eventually the two companies met at promontory point in Utah. There on the 10th April 1869 the two lines were a single length of track apart. In a ceremony the the last length of track was laid joining the two lines by a joint team. The last spike which connected the rail to the sleeper (ot tie to use the American term) was made of gold.
For a more detailed history of its construction I would suggest following the link to watching episode 6 "The Line" of the BBC series Seven Wonders of the Industrial World.
Promontory was not however an ideal location and the Union Pacific sold there track between Promentary and Ogden to the east of the Great Salt Lake.
The Central Pacific would later merge with the Southern Pacific Railroad Company, and they later built track (a series of causeways and bridges) across the Great Salt Lake. thus while track remained at the original meeting place it was reduced in importance as the mainline bypassed it via the shorter, quicker and more efficient route over the Salt Lake. Union Pacific would eventually acquire the entire route buying out the Southern Pacific in 1996. Today the Promontory is a national historic site not only with a visitor centre and museum but track and working replicas of the Central Pacific locomotive No 60 'Jupiter' and Union Pacific No 119, that regularly reenact the Last Spike ceremony.
Upon completion it was possible to cross the continental United States in a mere week in comfort and safety which was in contrast to the six months of toil and danger via wagon train or by sea via the most dangerous seas in the world. This could be done for $150 which was relatively inexpensive compared to the $1000 dollar cost of a waggon train.
Of course business, commerce and industry all benefited from a coast to coast link. Within ten years of the Golden Spike ceremony the line was transporting $50 million worth of freight coast to coast. This facilitated a marked increase in industrial capacity of the whole country which only increased as the railways expanded and other routes opened.
Communication was also improved. Telegraph wires were also built alongside the tracks and many stations had their own telegraph offices. In Fact the golden spike ceremony itself was communicated live via telegraph, famously reporting the word "done" when the tracks were joined. So the rise of modern instant communication is a story that parallels that of the railway.
Of course there were drawbacks amongst the most important of which was the impact of Native Americans. The line crossed their hunting grounds and thus by facilitating westward expansion brought settlers into conflict with them. During the construction railroad workers were attacked and the army was brought in. Thus beginning the various conflicts between the US Government and the various native nations that would lead to the decline of Native American culture and way of life.
While long distance passenger traffic on America's railways may not be what it was with competition form inter state highways and airlines the same cannot be said for freight.
The US freight network currently consists of 140,000 miles of track and employs at least 200,000 people. About 40% of America's freight from pencils to space craft is shipped by rail it still being the cheapest and most efficient method for heavy and long distance transport. The American economy and arguably by extension that of the world is thus dependentant on its rail infrastructure and this would not be the case if there were not a transcontinental railway. That more than anything is the reason why today's anniversary is significant. Happy 150th Birthday Transcontinental Railroad.

Posted by Sam McKittrick at 02:44 No comments: