On 18th November 2016, the United Kingdom's flag charity and representative on the International Federation of Vexillological Associations (FIAV) formally adopted a new flag and emblem at their council meeting.
The former emblem was a blue flag with a cross of St George forming a horizontal "V" shape across the field.
This flag was founded by the Dr William Crampton around the time the organisation was founded. The Cross of St George representing the founding date of St George's Day (23 April) and the "V" for vexillology the word for the study of flags.
It is a very good flag, there were however concerns that for a UK national organisation it was to English focused rather than British focused; and hence might discourage Scottish, Welsh, Northern Irish membership, that of any of the Dependencies and Overseas Territories.
A fair point as a non English, Briton my self I can say that I don't really identify with the Cross of St George on its own, however I also should say that the former FI flag did not put me off the organisation, and once I understood the symbolism of it representing the founding day I found it easier to identify with.
In 2015 the FI asked for submissions and ideas for a new logo or flag in their newsletter. I even sent in a design combining the Union Flag and Sheet bend know (international symbol of vexillology) in the form of an ensign. You can read about that post here.
The new flag is based on the lower quadrant of the Union Jack. Which is not at all surprising many nation vexillology organisation base their flags on their national flags or symbols.
The design is stylized to represent forward movement. I admit that this makes an Okay logo (although it does slightly remind me of the logo of the UK Space Agency), However I do not think it make a good physical flag, and the FI flag does function as a real flag not just a logo. It was designed by Graham Bartram and Philip Tibbetts, who have designed dome real good flags in the past, but I'm sorry to say I don't think this will be included as one of their greatest works. I think the previous flag was by far better.  However it was democratically chosen by the FI council however I still think I might have ago at designing a better one incase they change their mind.
Although I already designed an alternative in the form of an ensign which would work as a flag, i thought I might try one that works both as a flag and logo.
I think the thinking behind both FI flags was good (although the end result of the new one wasn't), so I thought of combining them. A sort of Union Jack 'V' shape instead of a St George one. This is what I came up with: 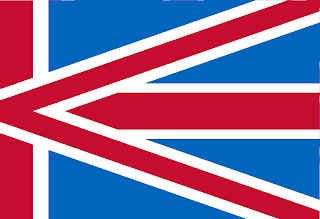 I feel this works better as it is clearly based on and reflective of the Union Flag, but is distinctly different and dosn't look like someone just cut up a flag and ran it up a pole.  Alternatively you could place the horizontal red bar in the fly with the 'V' pointing towards it to give the impression of a forward pointing arrow. Personally however I think the solid red bar looks better in the hoist.
I certainly think it works better as a flag when you compare it to this image of HQS Wellington (the FI postal address) i prepared: 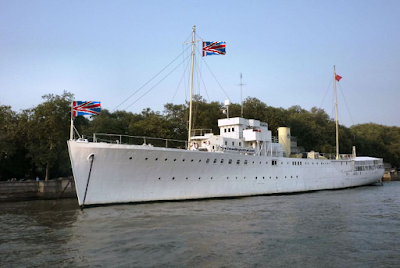 Posted by Sam McKittrick at 08:27 No comments:

Apologise for the lack of activity at the moment I am currently very busy, but I have material for a few posts waiting which I will try to get up when I can.
About a year ago Nigel Johnston posted a design on the New Flag for Northern Ireland facebook page. It was a green/blue bicolour with six hexagons in the middle. It is a most interesting design certainly one of my favourites, but there are a few aspects I don't quite like about it.

however despite that I think this is fixable.
I played with it a little bit, and decided to add a white dividing line between the green and blue. I also changed the colour of the hexagons so that they reverse the colours of the field. i.e green on blue and blue on green, with the centre ones being divided in the middle.
I also coloured the centre star white to make it stand out a little more and added a red hand of Ulster in the middle.
However in the spirit of Johnston's original flag I refrained from using the traditional heraldic red hand and opted instead for a red hand print, like a child's hand. This was idea I think was first voiced by Dr Dominic Bryan for his own proposal in 2010, and I think it's a good twist for a traditional symbol on a modernist mix of colours and shapes. As Well as be a recognisable regional symbol it is also a great way to symbolise the future.
Lastly I moved the charge off centre towards the hoist. 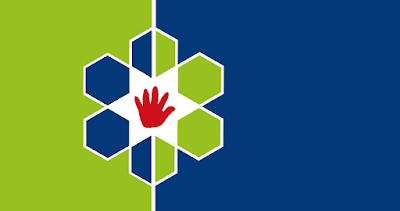 I admit it still has a little bit of that corporate feel about it, but that is probably unpreventable when not using traditional heraldic symbols. I do think however that by taking the above mentioned steps that the corporateness of it is greatly reduced and it has more of a flag like feeling.
Of course the original symbolism of Nigel Johnston's flag was the star representing the six NI counties and the hexagons reflective of the Giant's Causeway, which is maintained.
The colours were reflective of those descended from Gaelic Irish roots and agriculture (green) and the social and cultural connections between Northern Ireland and Scotland and the sea (blue).
while these are all good things to symbolise I feel that trying to symbolise two communities by colours is doomed to failure, as by the very nature of flags one will always be seen to be the more senior. Plus by moving the dividing line off centre greater emphasis is put on blue which could be perceived to be more in favour of those of Scottish decent.
I think therefore it would be better to state that both green and blue are traditional colour historically associated with not just Northern Ireland but the island of Ireland in general. In fact green, white and blue are popular colours for NI international football supporters and are also used by other international sports teams both all island and Northern Ireland specific.
The main purpose of moving the charge of the flag off centre is actually a little bit of an optical illusion, as when the flag is flying it gives the impression of the charge being centred, and it is also more easy to identify when the flag is at rest on a pole (when no wind is blowing):
As this doctored picture of the NI Assembly building shows: 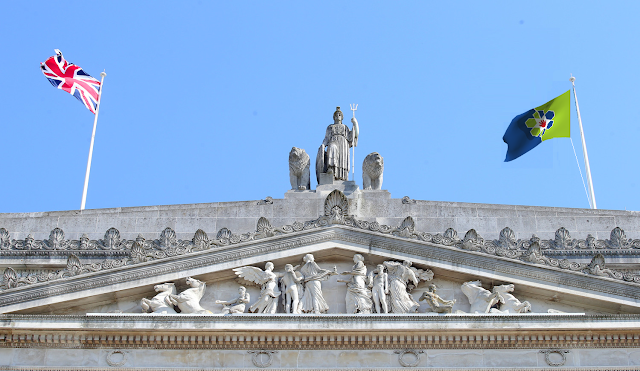 It is important to remember that flags are moving 3D objects and not static 2D images on a screen or page, They also have to be recognisable at a distance. These is I think where Mr Johnston's original proposal let down. However it was still an excellent design with potential, which I hope with my alternate adjustments can be exploited.
Posted by Sam McKittrick at 05:45 1 comment: