Some other NI flag designs

Unlike other posts none of these flags are my designs. I have been too busy recently with work to even think about that. But in the recent weeks and days some very interesting designs have appeared on social network site pages.

First is a very interesting if not controversial design by Rev Ivan Dinsmore:

This combines both Unionist and Republican symbolism. It takes the form of a UK blue ensign with the 'big dipper' star formation in the shape of an old fashion plough in the fly. As the Union Flag is in the canton it represents British Sovereignty and so would (in theory) please Unionists. The Stary Plough is a leading Republican symbol that often appears on both flags and murals. Although there is well meaning behind it  I doubt this would work as Nationalists won't accept anything with a union flag in it, and the stary plough has links to Republican terrorist groups which will throw Unionists. Personally I like it, but I wouldn't like it as my flag as I think it is more like the flag of an overseas territory rather than one of the UK home nations.

The fallowing designs are from Chris Connolly, firstly:

As is often seen on these NI flag designs the red hand is central. This design features a combination of the Cross of De Burgh and Cross of St George combining the unofficial de facto NI flag, the Ulster Banner and Provincial Ulster Flag. What I really like is the use of symbols representing the two main traditions  The lower fourth quarter has a harp on green field, a nationalist symbol. Was used the Irish Catholic Confederation by Nationalists as an unofficial de facto flag for Ireland in the 19th century. The top second quarter has a banner of the coat of arms used by the House of Orange, around the time King William III (Prince of Orange) was joint monarch of the three Kingdoms. It is interesting that in other designs where the connection to the House of Orange is used to represent Ulster and Irish protestants the colour is used (such as the Irish Republic's tricolour) but this is the first version I have seen using the coat of arms. I don't even think the Orange Order uses the coat of arms. A version on St Patrick's Saltire with the arms facing each other is below:

I like this flag, the symbolism is good and the idea of the Orange coat of arms is very original.
Chris Connolly then made two further versions of this theme replacing the Orange coat of arms with the Royal Arms of Scotland reflecting the Scots ancestry and elements of that culture in Unionist identity as well you could argue loyalty to the crown:

Another version using the late-medieval Gaelic Harp as used on the coat of arms of the Republic of Ireland:

I like the latter better than the former as it can represent NI with its two closest Neighbours on each side as well as loyalties. The colour scheme of yellow and blue I think works better than yellow and green.

Another version with both yellow that could reflect the Ulster Flag colours. I am not sure if I like this one.
I think I pre-fare the version with the Orange arms rather than the Scottish.

Peter Collier has designed some very good ones, Which I will show you, firstly:

The red hand in the hoist, with a red and yellow fly not sure I like the colour scheme, but the white hoist to me looks like half a hexagon which for some reason I like. Next up is a Union Jack type design:

Now it is too cluttered to work but I like the central design of four hexagons resembling the Giant's Causeway, with red hand and flax flower in the centre and a harp and crown to the sides, again resembling the two traditions, cross of De Burke is also in there. the blue saltire is also very unusual.
Now for my favourite design of the lot also designed by the designer of the two above flags:

Six Flax flowers forming a hexagon representing the six counties. The blue and gold bands are really just to make the design interesting with the colours from the flax plants, with no symbolic significance. Although you could say the blue is St Patrick's blue and the gold is from the Ulster Flag.
Another version of the above design is below:

I am not sure but I think I like the first of the two better.
All Comments welcome.

None of these designs belong to this site or publisher but to their respective designers who are already mentioned in the above text.

This post is about Antarctica  There is a present no flag for the continent. Although it does have nine territories eight of which use flags. These are:Happy New Year everybody. I apologise I haven't updated sooner but at present I am very very busy. But here are some designs I made before Christmas. I apologise for the big space above I don't know why that is.

Flag: Official flag is the National flag of NZ although an unofficial flag exists which is a light blue NZ flag.

Flag: Both territories use the Norwegian flag and have no unique flag of their own

Flag: Blue and orange field divided by white with a southern cross star formation in the fly.

Flag: National flag of Australia no unique flag of its own.

Now There is a flag of the Antartic Treaty :

I was thinking the above territories could use a collective flag similar way Europe uses the EU flag. 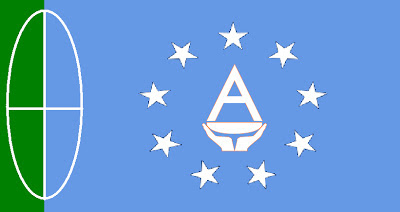 It features the Earth design but with a lighter blue and the 'A' logo with a half globe and hands from the flag designed by Whitney Smith . And a star for each territory.

Flags that I have designed  for the territories that don't have flags are below.

Peter I Island,  Norway flag with a light blue field.

Australian Antarctic Territory, Australia flag with light blue background on which the letters 'ATA' are occupying the space normally occupied by the Commonwealth star which has been moved to the fly.

Marie Bryd Land, Antartic flag design in hoist with a single star. Light blue field with a single white stripe. As this is unclaimed a representative of each territory should be on a governing council to meet when matters regarding this region arise.

Flags in this unless stated otherwise are not my designs
All Comments welcome
Posted by Sam McKittrick at 12:00 1 comment: