Its been a while since I have did a heraldry related post, and inspired by the launch of the ESA's Major Timothy Peak along with NASA astronaut Colonel Timothy Kopra and Roscomos cosmonaut Colonel Yuri Malenchenko, I thought I would design a coat of arms for Tim Peake the UK's first official astronaut (other Britons have went into space but were either privately funded or NASA personnel with dual US citizenship).
the blason of my idea for Tim Peakes arms is:
Arms:Sable,a bend cotised sinister alternative bleu celeste,azure, in the dexter chief an estoile argent.
Crest: On a terrestrial globe a lion salient or, winged  charged with the roman numeral of one. Supporting in the dexter forepaw an escutcheon: Azure, the Crosses Saltire of St Andrew and St Patrick, quarterly per saltire, counterchanged Argent and Gules, the latter fimbriated of the second, surmounted by the Cross of St George of the third, fimbriated as the saltire.
Motto: Inspiration & Discovery 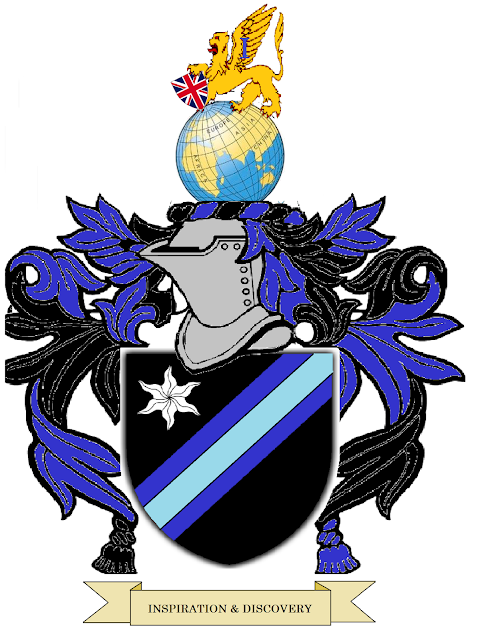 The symbolism of the arms black and a white star is obvious. The blue bends reflect the flag of the Army Air Corps, which is the corps Tim Peate has served in most recently as an attack helicopter pilot and test pilot.  The single star represents human space flight, the reason their is a single star reflects that Tim Peake has only flown one mission (the current one), I thought it would be a nice touch that more stars would be granted for more flights. The reason I used an estoile rather than a mullet is because an estoile is believed to originate the symbolism of the stars in the cosmos, where as a mullet is thought to originally symbolise spurs (although that's debated).
The crest symbolises his achievement of being the first official British astronaut. The lion (often seen as the national animal of the United Kingdom) marked with a "1" and supporting a Union badge standing on a globe symbolising British symbols orbiting the planet. The wings on the lion hint to it flying in orbit and also reflect Tim's background in aviation.
The motto reflect the mission of a British astronaut to advance science, space flight and exploration but also to inspire the people of the country and the planet.
I thought a good heraldic badge would be an estoile charged with a Union badge defaced with the roman numeral "1" again symbolising the achievement of the first (official) British astronaut. This could be used in a standard:

I'm sure everyone would wish all the crew good luck on their mission. This is also probably the last post of the year and I'd like to wish everyone a Merry Christmas and Happy New Year.

Posted by Sam McKittrick at 05:37 No comments:

Something I have been thinking about since my post on military colours is the surprising lack of ceremonial colours in the British Army compared to other national armies. contrary to how it may appear not every regiment in the army carries colours. Only the Infantry and Cavalry regiments (with the exception of the honourable Artillery Company) units whose job is to close with and engage an enemy, but regiments of the other corps like the engineers, signalers, and logistics etc who support those units don't usually have colours (although they all have camp flags).
I think this lack of flags stands out on parades and other ceremonial events. So I decided to have ago at designing colours for some of these units, starting with the largest corps in the army, the Royal Logistics Corps (RLC), who's personnel specialise in a wide variety of support roles from chef to bomb disposal. A lot of RLC personnel are attached to or work within other units, but there are also logistics and support regiments within both the regular army and reserves which could carry colours.
The current regulations on colours and standards only cover infantry and cavalry which means I am pretty free for to make up anything for the RLC.
I decided the basic RLC standard should be a guidon, because ever since the corps origins in the Royal Waggon Train it has a close relationship and similarities to cavalry. The RLC has five battle honours (the only corps to have battle honours) which have been won either when the Royal Waggon Train detached their horses from their waggons and charged like cavalry. Cavalry structure and terminology is also observed with the sub units of regiments and squadrons rather than companies or battalions.
The standard design is a blue swallow tailed guidon, with the corps badge (which is in itself a fascinating design) in the centre. In the canton is a union device the centre of which bears the regiment number in roman numerals. The second and third quarters bear the royal cypher and the fourth quarter bears a local/regional or unit insignia unique within the corps to the regiment in question. The flag itself is fringed in gold and the tassels are gold and blue (the corps colours). This was partly inspired by the Irish Volunteers colours mentioned in my history of Irish flags series. The standards are: 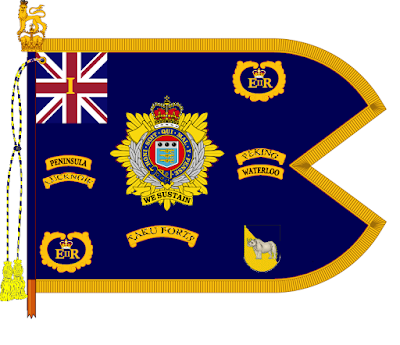 The rhino on a blue and gold shield (like the RLC arm patch) is a heraldic version of the logo found on their page of the army website. 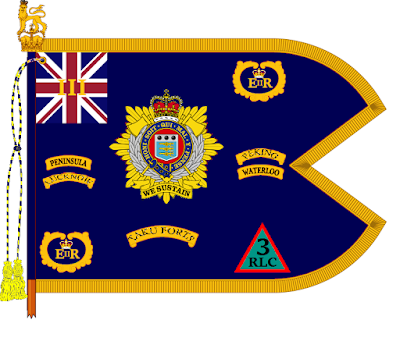 The Unit badge on the standard is based on the insignia of 1 Mechanized Brigade which the regiment is part of. 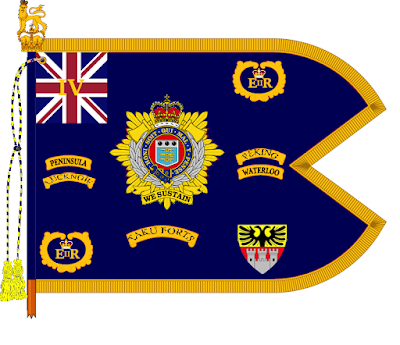 I don't recognize the coat of arms but it appears on the regiment's page on the army website. 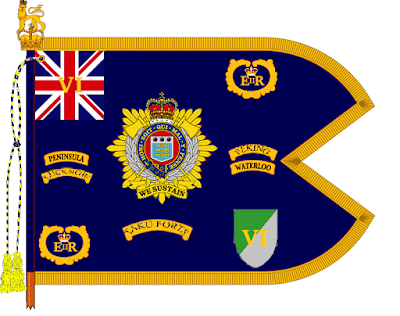 The shield is based on the insignia on the regiment's page of the army website. 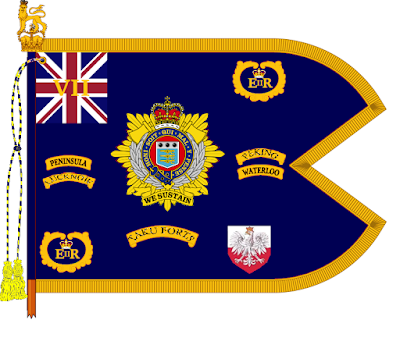 The badge is on their webpage and reflects the regiments links to Poland, its predecessor having a Polish contingent in the Second World War, and although it now consists completely of British, Irish and Commonwealth citizens it maintains many of its Polish traditions. 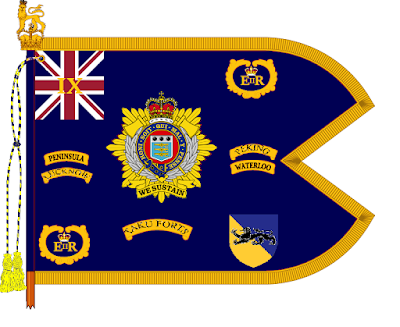 The coat of arms is a heraldic version of the logo on their page of the army website. 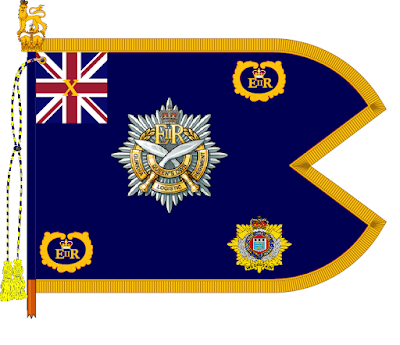 The corps commitment to the Brigade of Gurkhas and the only RLC unit with its own unique cap badge (due to it being a Gurkha regiment). Unlike the other standards the Gurkha cap badge is in the centre and the RLC badge in the fourth quarter. 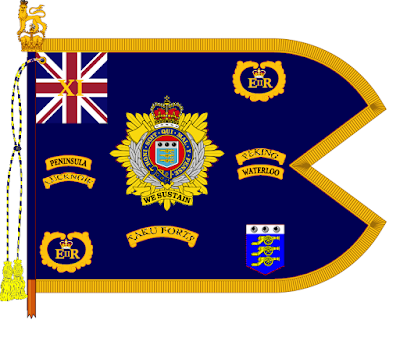 The RLC (along with the corps of Royal Engineers) is responsible for bomb disposal, a job inherited from the Royal Army Ordnance Corps, who's original job was maintaining ordnance but during WW2 and post war conflicts found itself mainly defusing them. I was tempted to use the regiment's mascot Felix who's logo often appears on their vans.  However I decided to use shield of the historic Board of Ordnance which was used in the badge of the old Army Ordnance Corps and is still used in the RLC badge. Which given this units history is particularly appropriate. 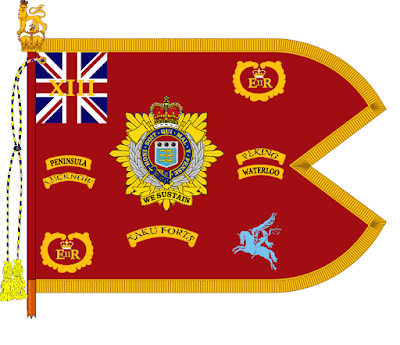 A red field rather than a blue one for this regiment, this reflects the colour of their berets. In the British Army red berets denote Air Born troops which this regiment is. The badge depicts Bellerophon on Pegasus from Ancient Greek mythology. A symbol used by UK air born forces that is recreated at the national paratrooper memorial. 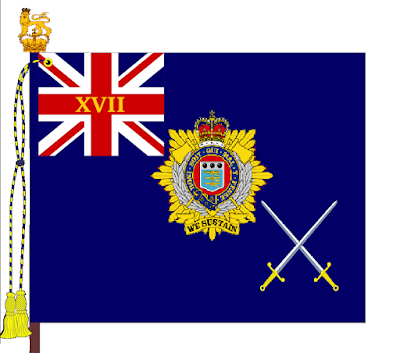 As this regiment's role is operating in ports and operating boats, ships and other vessels, I thought it appropriate that like the Royal Navy and Royal Fleet Auxiliary (and even the RAF) it's standard be based on the ensign flown from Army/RLC vessels. It keeps the number in the canton and RLC badge in the centre. 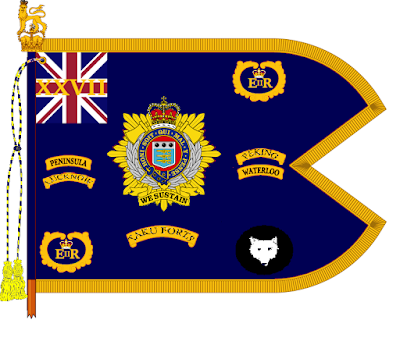 The wolf insignia comes from the logo on their page of the army website. 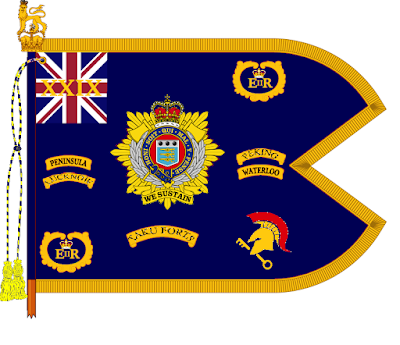 The Roman helmet and key is a symbol used by the unit. 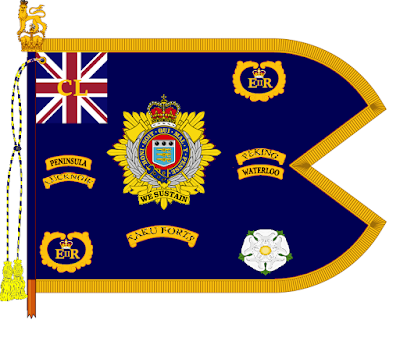 The reservist standards follow the same pattern to the regular units, although as most reservist regiments are located in and recruit from a specific region, there is a greater emphasis on local/regional symbols as unit insignia. The example hear being the white rose of the House of York. 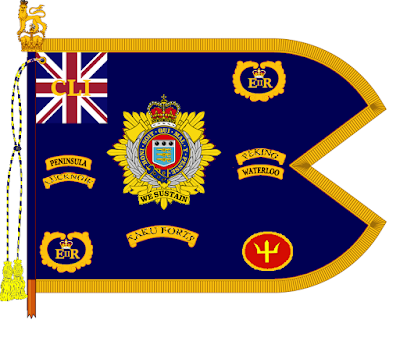 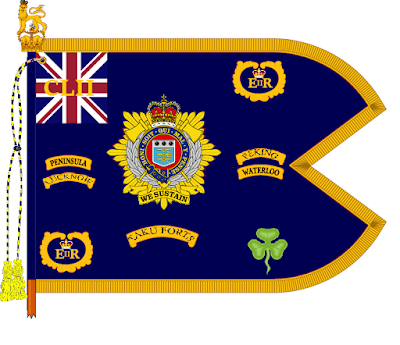 I was initially thinking of putting the red hand of Ulster on the 152 standard, however I settled for the shamrock as it is used on the regiment's logo. 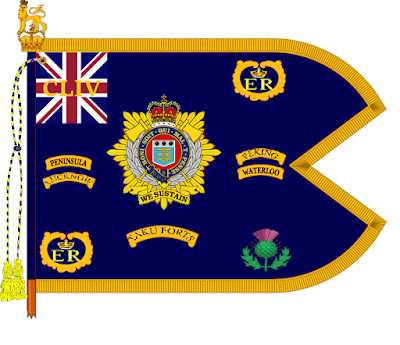 If Northern Ireland gets the shamrock, then of course Scotland has to have the thistle. The Royal cypher has changed to the Scottish variant, which drops the "II" (there was never an Elizabeth I of Scotland) and uses the Scottish crown. 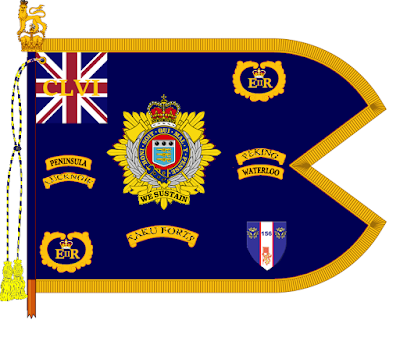 The shield which seems to have elements of civic arms of NW England, is the unit coat of arms. 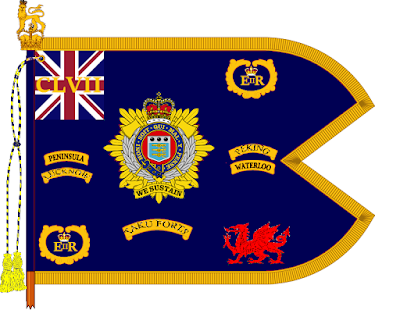 The Welsh regiment insignia is of course the red dragon of Wales. 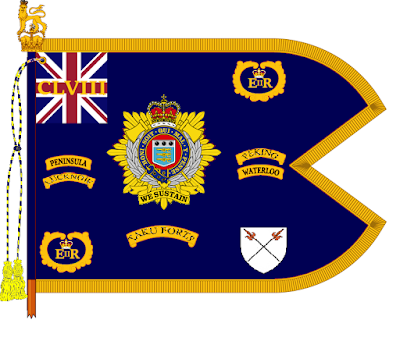 Crossed Halberds are used as the regiment's logo. A common symbol of the execution of military duty. 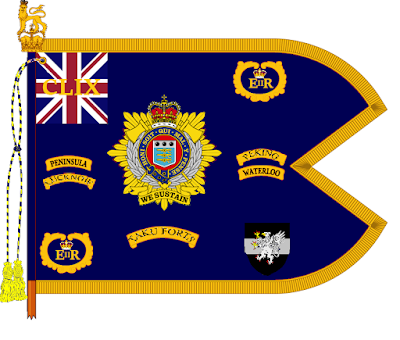 The black and grey shield is based on the logo on the regiment's insignia. The regiment is based in the Midlands and the griffin is common in Midlands heraldry such as the West Midlands coat of arms. 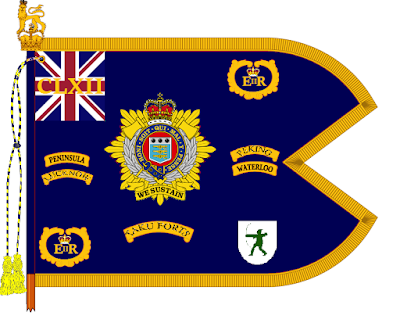 The coat of arms of 162 regiment has a figure of robin hood as the regiment is from Nottingham. 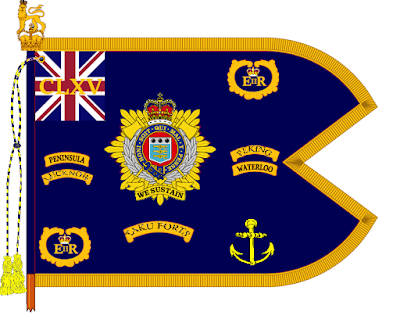 I was going to use an ensign based standard like 17 Regiment, however as the regiment has some vehicle squadrons which have cavalry & yeomanry history like 142 (Queens Own Oxfordshire Hussars) Vehicle Squadron and 710 (Royal Buckinghamshire Hussars) Operational Hygiene Squadron so this is reflected in the guidon, with the regimental insignia being an anchor. 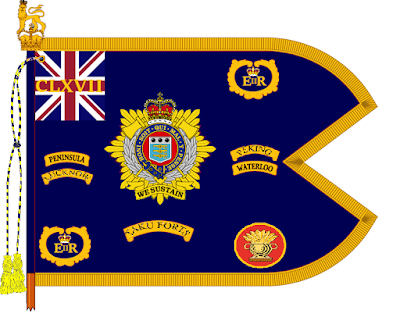 There are two independent commando petroleum squadrons, whereas not complete regiments I think they deserve pennants. These are green to reflect the colour of a commando's beret. They are smaller than a regimental standard, but have Roman numerals in the canton and the corps cap badge in the centre. 383 Squadron uses the sword symbol used by Army Commandos and 384 uses the red hand of Ulster as its a Northern Ireland unit.