What the armed forces would be like in an independent Scotland is one of the main points of debate in the upcoming referendum, and is something that keeps popping up on the news, despite their being very few details available. If you are not too failure with the debate you can watch a quick and simple news clip here.
Now this is not a post for or against independence, personally I wouldn't be too keen on the idea, but its up to  the Scots to decide. This is just some suggestions from a vexillological  point of view on what the flags of a Scottish Defence Force might look like.

First is the senior Service the Navy. The navy would mostly be responsible for protecting Scottish Fish stocks and oil rigs in the North sea so would mostly be patrol vessels with a small number of Frigates and Destroyers. The Naval ensign is like other commonwealth navies is white, and as the Scottish Nationalists are keeping the monarchy (for now anyway) it would be a Royal Navy and is defaced with the Royal Arms of Scotland. 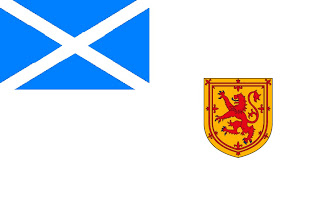 The Navy Jack would be the national flag. The Naval Colour is an inverted St Andrews Cross with the Scottish Crown, cypher and an anchor: 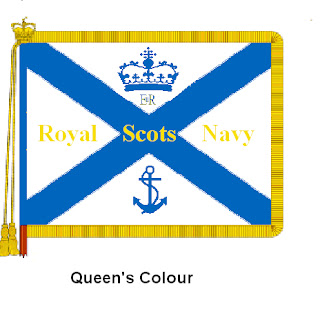 The marines colour is based on the Army infantry colours which you will see in a moment. the badge of a globe and anchor is based on the USMC badge, globes and anchors common on Marines badges throughout the world. A trident is also featured, The Scottish Marines colours could carry some of the battle honours of the Royal Marines, and would be part of the Navy rather than a separate corps, it would probably consist of just one battalion:

Next is the Air Force. There is currently two RAF military airfields in Scotland, with one RAF control centre which controls air traffic for the whole region. There is also two search and rescue helicopter stations in Scotland (one RAF and the other Royal Navy). Presumably this would make up the Scottish Air Force. The Air Force ensign is based on other commonwealth nations:

I decided to use a dark blue for St Andrew's Cross as it stands out more against the light blue field. The roundel is based on the RAF roundel but with a thistle design. This fallows the example of Canada and Australia. 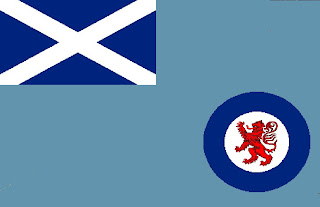 The Colour of the air Forces is based on the ensign however it has the Scottish Royal Cypher on it and an air force. 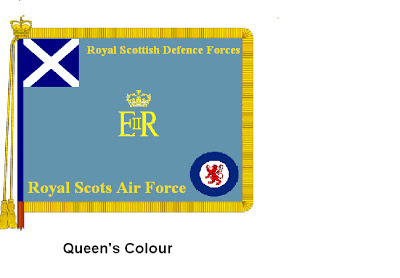 Squadron Standards were an after thought so I didn't design one for each potential squadron, but I did design a standard type of design: 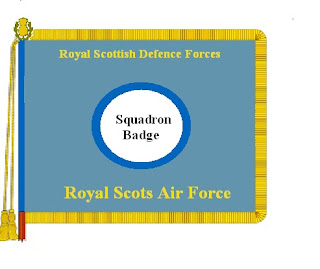 I am no strategic expert but I have calculated colours for the units I think the Land Forces (Army) would need. But First the Army Flag, based very much on the non ceremonial British Army Flag, It incorporated crossed sword with the Crest of the National coat of arms on it. Unlike the British Army Flag it is on a saltier: 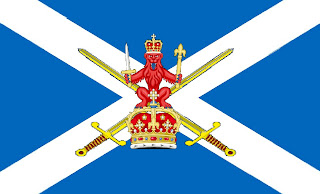 As Well as being the general flag of the Army it will also be the 'camp flag' of the Headquarters Corps, This is based on the British Adjutant General Corps which is responsible for pay, administration and all the office stuff needed for the day to day running of the army, among other things. The colours of this unit are below:

The Headquarters Corps colour fallows a standard pattern for the 'Corps' units, It consists of two colours which could also be used as an arm patch. It has the National flag in the canton. It features the crest in the army flag but with the motto "In Defens" (Defence) on it. The Queens/Kings colour also fallows a standard design of the National flag defaced with the Royal Arms and cypher, also of note is the top of the poles. On the Queen's Colour the top is a crown but on the regimental there is a thistle decoration.

Next is the Military Police. The Camp Flag feature the horizontal colours of Crimson and Gold with a crowned  thistle badge. 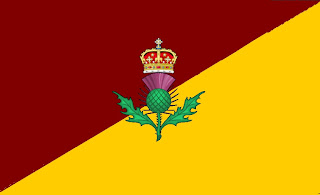 The colours are similar:

The Military Police badge features the Scottish Police badge but emblazoned on two crossed swords to symbolise the military.

The Engineers and Mechanics Corps features two crossed axes on a lightning bolt that has a thisle emblazoned on it. 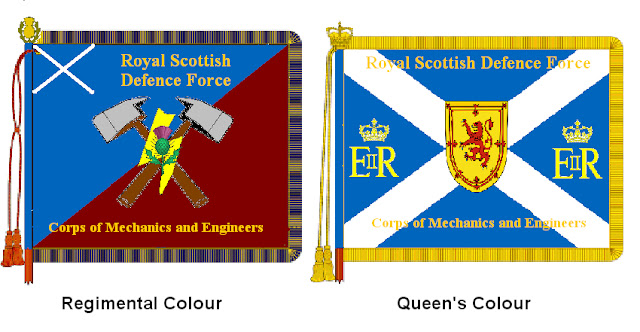 The camp flag is a simplified version of the Regimental colour: 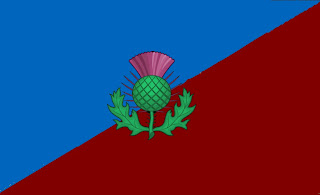 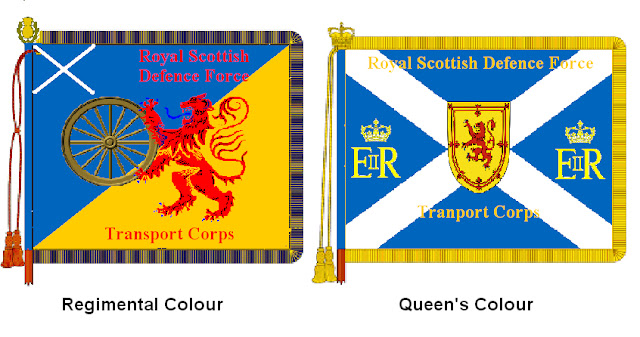 The camp flag is again a simplified version of the colours: 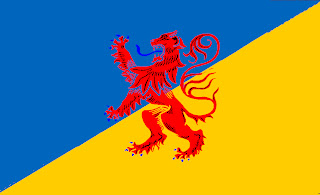 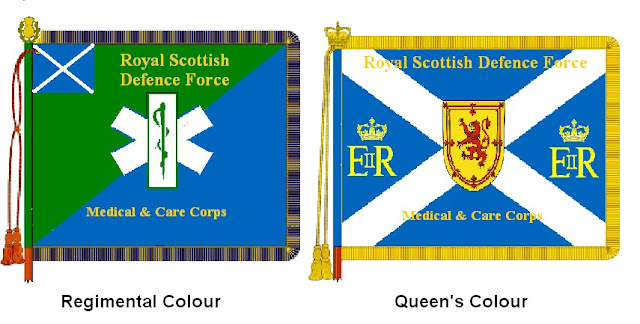 The camp flag feature a red cross as this is more universally recognised and easier to identify in a theatre of operations. 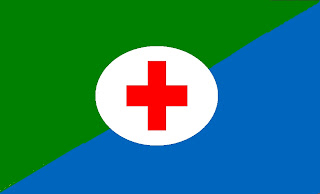 Next is the backbone of any army, the infantry. The Nationalist party says it will retain the names of famous Scottish regiments, I think their will be one infantry Corps but each battalion would have a carry a name of the a past regiment. I think given budget constraints five battalions both regulars and reservists is enough, The camp flag for the infantry will be satire based with crossed swords and the battalion number for example: 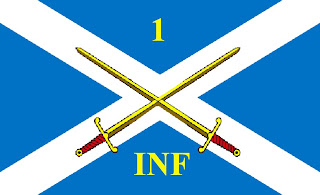 The ceremonial colours the infantry battalions will feature a saltire as the battalion colour and a Royal Banner as the Queens/Kings Colour, the battalion number will be in the canton in Roman numerals, The Queen's Colour will feature the Royal Cypher. Both Colours will bear selected battle hounors of their names sake's predecessors:

As their are six historic regiments and only five battalions I did what the British Army did and merged the Royal Scots with the Kings Own Scottish Boarders. The badges of each is in the fly. With a central cypher, thistle and Saint Andrew design in the middle.
The Second Battalion bears the name of the Highland Fusiliers:

The Historic badge of the Fusiliers is in the centre of the battalion colour.

The third battalion bears the name and badge of the Black Watch:

The fourth Battalion bears the name and badge of the Seafourth, Gordons & Camerons Higlanders also known simply as the Highlanders:

The Fifth Battalion bears the name and badge of the Argyll and Sutherland highlanders:

There is also a Scottish regiment of Royal Foot Guards (the Scots Guards) which are famous for guarding Buckingham palace as well as being operational soldiers. If this becomes part of the Scottish Defence Force I think it might keep its ceremonial duties and identity as a guards regiment. Its camp flag bears the guards colours of Blue, Red, Blue. And features the Scottish Crown. It is based on the flag of the UK Household Division (which the Scots Guards are currently part of): 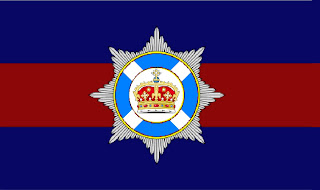 The colours state it is the Royal Guards Regiment and bear the Scots Guards badge. (it also has a grenadier badge as all older the guards regiments were founded as grenadier regiments) It also says 3rd Foot Guards to demonstrate it was the third most senior Guards regiment in the army. The Queens Colour like the other infantry regiments is a Royal banner:

The Flags of the Artillery copy that of the infantry but bear cannons instead of swords: 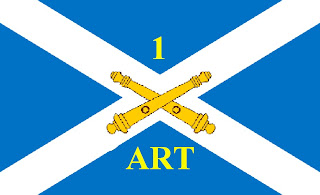 Their are currently two Scottish Artillery regiments one is regular and one is reservist. I think this would more or less remain the same: 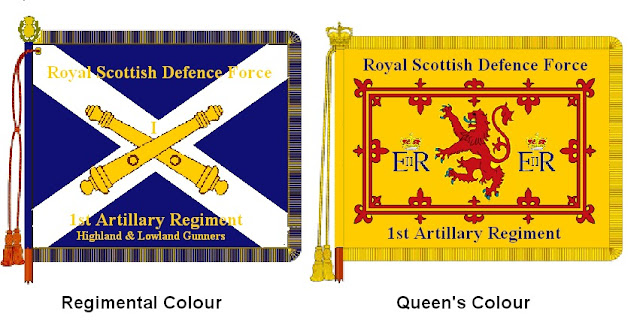 In the second Regiment Colour  I stated that they were reservists, this is the only colour that says the unit is resevists however I think most of the Scottish Armed forces would be made up of reservists. 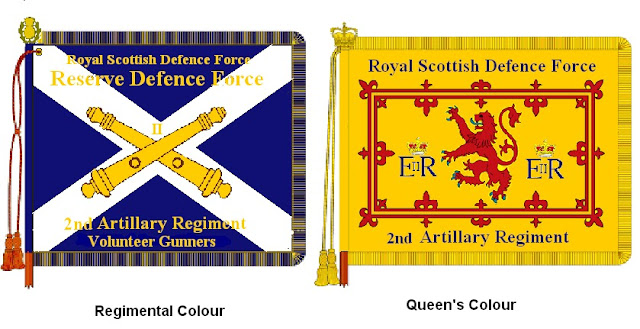 Like the infantry the Regimental colour is the national flag and the Queen's Colour a Royal banner however their are some slight differences including no battle honours and only to Cyphers where there were four in the infantry colours.

Last but not least is the Armoured Regiments. There are currently two Scottish Armoured units. The Royal Scots Dragoon Guards and the 2nd battalion of the Royal Tank Regiment. These fallow the Calvary traditions so rather than a Regimental and Queens Colour they have a guidon and sovereign standard.
First is the 2nd battalion Royal Tank Regiment which would probably not keep its name as it could cause confusion with the British Regiment of which has one Scottish battalion. So it has become the Armoured Corps: It has a new badge (an armoured Fist) but keeps its old camp flag colours: 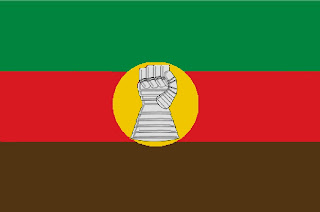 The guidon features a saltire defaced with the badge, and a selection of battle honours, the Sovereign standard features the Royal Arms inside the Royal Cyphers. I am not to familiar with cavalry traditions but I don't think these two flags be used together like infantry colours do.

Last but not least is the Royal Scots Dragoon Guards. Their camp flag is based on the unique design they wear in their caps. I think the best way is to show  you a picture, so here's a picture of some members of the regiment watching the regimental band, amongst other things you can see the distinctive breading in their caps:

And here is the camp flag design: 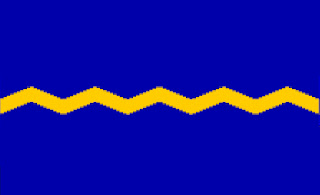 The colours feature the current badge which features the imperial French eagle the regiments predecessors (the Scots Greys) captured at the battle of Waterloo.

again I remind you this is not about the referendum or politics but vexillology.
All these designs are by myself