This is a post I have been meaning to do for quite a while. The Ministry of Defence (MoD) is the government department which is responsible for the armed forces. Its badge is below:

The anchor represents the Naval Service, the crossed swords represent the British Army, and the Hawk (not an eagle) represents the Royal Air Force. All these are toped by the crown of state. The MoD uses a tri-service flag :

This flag is a tricolour with each colour representing one of the armed services. Dark blue the Navy, Red the Army, and sky blue the Air Force. In the middle is the MoD badge with the individual components in the colour of its respective service. On a personal level I think this is rather ugly. These colours don't work well together without fimbriation and I don't think the badge is recognizable on a flag that is flying.
My solution is a new badge and flag. The new badge is below: 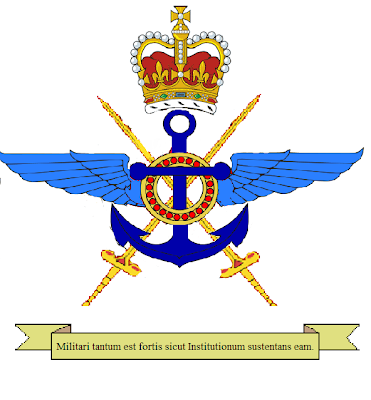 It is similar to the old one however the individual component. I replaced the hawk of the RAF with a pair of wings similar to the badge of a military pilot. The Navy's anchor goes through the wings and the Army's swords are behind. The Mod has no motto but I added one, which translates as "The military is only as strong as the institutions supporting it." Which is a quote from the author Michael DeLong. Unlike the MoD I won't use the entire badge on a flag. My tri-service flag is below: 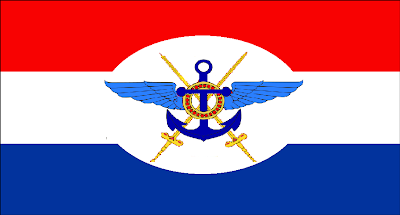 Firstly the only the tri-service emblems and colours are on the flag leaving out the unnecessary clutter of the full badge. I changed the colours to red, white and blue. Unlike the current flag the colours are not arranged in seniority of service, but in what is more aesthetically pleasing from a vexilogical point of view. by putting the white in the centre it separates the red and blue, which the current flag doesn't.
The Red represents the army, I had thought of changing this to green to represent the Khaki colour of the Army's general service (No2) Dress, and because one of the nicknames of the army is "the green."
However the traditional colour is red, and the army is still known as the "thin red line" and the full dress uniform of most regiments is still red, although some units wear green or black.
The use of red also means the flag is in the national colours of the UK. White represents the Navy, although Naval uniform is only white in warm climates, the colour white in the navy can't be ignored. The Naval ensign is after all the white ensign.
The Blue of course represents the Royal Air Force.
The flag of the Secretary of State for Defence is the government minister who is in charge of the MoD. the flag I designed for him is below: 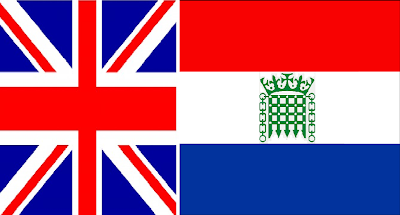 If features a Union Flag at the hoist, with the tri-service colours in the fly. The badge in the centre is the Westminster Gate, the symbol of the houses of parliament, of which the Secretary of State is naturally a member. The colour represents the house of parliament he is a member of in this case the House of Commons.
Below the Secretary of State for Defence is the Chief of the Defence Staff. This is the highest military position in the Armed Forces. The current CoDS flag was my inspiration for the personal flags here: 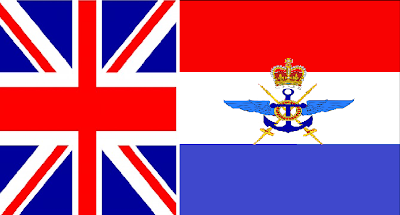 This flag fallows the same pattern as Secretary of State, but with the emblems of the armed forces and crown, the Chief of Staff is assisted by the Vice-Chief of the Defence Staff: 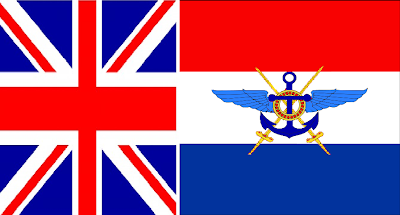 It is the same as Chief of the Defence Staff but minus the crown. There are also Deputy chiefs who are responsible for individual areas such as training, equipment, operations etc. The Flag for a Deputy Chief is below: 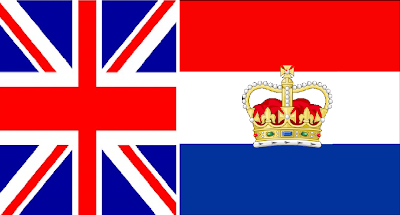 
The heads of the army, navy and air force would use the rank flag of their respected service.
I hope you enjoyed this please feel free to comment.
﻿
Posted by Sam McKittrick at 15:53 3 comments:

Some people might remember my Railway Heraldry post. It covered coats of arms for the main rail companies in Ireland and their jointly run express service. Well their are smaller, private railroads in the British Isles too. These are often industrial, or as in this case tourist and enthusiast orientated.

The Giant's Causeway currently has a rail link with the town of Bushmills. These too places were first linked by rail in 1887. It was an electric 3 ft (914 mm) gauge narrow gauge railway, operated by Giant's Causeway, Portrush and Bush Valley Railway & Tramway Company Ltd. Originally this rail system known as a tram, or tramway connected the seaside town of Portrush with the tourist attraction of the Giants Causeway with a station in the middle at Bushmills. This tram was mostly run by hydro electricity probably one of the first examples of hydro electric power in the world. I also believe it was only the second electric train in the UK (it was beaten by a couple of days by a train in the south of England). Sadly this company closed at the end of 1949.
The original emblem used by the tramway  was this: Unlike other historic railways in Ireland it doesn't have a coat of arms or coat of arms based design. It shows a couple walking along the path to the causeway, clearly hoping to attract passengers to take the same journey as the people in the picture.
In 2002 a new company was set up and the rail track was rebuilt between the Causeway and Bushmills. This was built by enthusiasts (with a little help from an army helicopter when it came to rebuilding a bridge!) This company adopted the old badge but adjusting the text so it only reads Giants Causeway and Bushmills Railway Company. However I have been working on a new design: 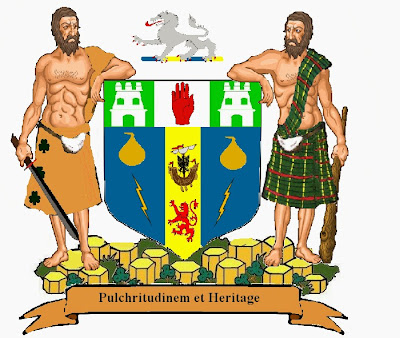 There are a number of things. Perhaps the most striking are the supporters. These depict the Irish and Scottish giants from the legend of the Giants Causeway. Although every wee Northern Irish boy was told it as a bedtime story for those who are not too familiar with it see here.They are standing on the base that has some Causeway stones.
The shield is based on the County Antrim arms and the Moyle District council coat of arms. 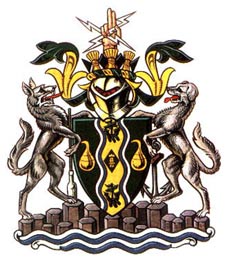 The chief of the arms and lion rampant coming from the Antrim arms, while the ship, stylised stills, and wolf crest coming from the Moyle District coat of arms. The Stylised Stills represent Bushmills which is famous for being the home of Old Bushmills Distillery which claims to be the oldest licenced Whisky distillery in the world and as well as being a working distillery producing Bushmills Irish Whisky, is also a tourist attraction. The ship represent the clan MacDonald which was an important family in ancient times who built the nearby Dunluce Castle. Although I have also put the eagle form their arms on mine. The lightning bolt on blue represent the historic implication of hydro electricity (even though today the trains are powered by steam and diesel its still something the railway can be proud of).

The motto means beauty and heritage which is what most people who ride the train are going to see.