A thought that occured to me listening to the radio yesterday. They were debating if there should be a British national identity card, like in other countries. Now those against said it would be a move towards totalitarianism, where as those for it pointed towards usefulness at home and abroad, as well as a convenient nationally recognized form of ID for those who don't have a drivers licence or passport. Not quite sure where I stand on the debate, but if there is one, this is what I think it should look like: 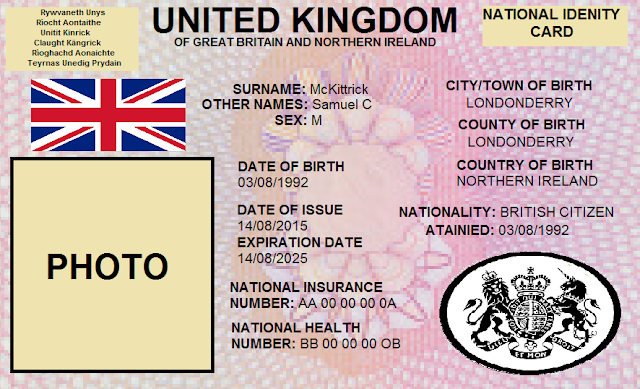 It has the patterned background to combat forgery, and "United Kingdom" in bold text in the header. For those who live in the Dependencies or Overseas Territories the "of Great Britain and Northern Ireland" could be replaced with "Crown Dependencies & Overseas Territories" To the left is "United Kingdom" written in Cornish, Irish, Lowland Scots, Ulster Scots, Scot Gaelic and Welsh, similar to the first page of the UK passport (except Cornish, Scots dialects and Irish) except it simply reads United Kingdom rather than the full title.
Some people talked about ID cards in other countries including eye colour, weight, hight etc. I think thats a bit over the top and that all that is really needed is the information on your passport, principally you name, gender, date of birth, nationality and home town, with the addition NI number and NHS number.m
The visual aspects naturally include a photograph along with the national flag and the variant  royal coat of arms used by the government.
The back of the card could look like this: A crimson background similar to the passport cover. With UK national ID card in bold clear text, and information stating its government property and should be handed into the authorities if found. A coloured variant of the Royal coat of arms in the centre.
Please Feel free to comment
Posted by Sam McKittrick at 05:58 No comments: