The second part of the American States flags post redesigning state flags based on a standard template. For Part 1 click here. 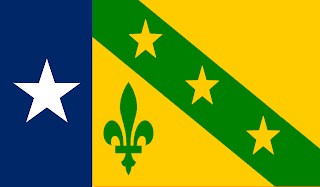 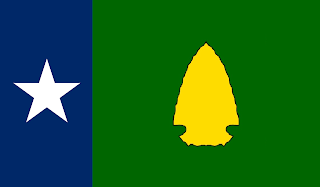 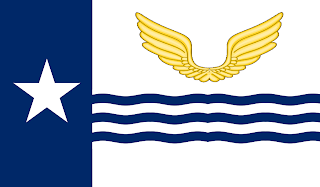 The current Ohio flag is very creative, but unfortunately dosn't fit the template, which is certainly one of the drawbacks of this approach. The waves on this flag represent the Ohio River which is the state's namesake. The heraldic depiction of the wings represent the fact the Ohio is officially the birthplace of aviation. Although the first powered flight took place in North Carolina, Ohio is the birth state of Orville Wright one of the inventors of the aeroplane. 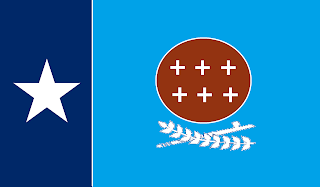 This is very much based on the current state flag as I actually like most of the symbols depicted on it, just the way they are depicted.  Given the symbolism of the blue field as representing the Choctaw flag, the first flag adopted by native Americans, I decided to make an exception from the one shade of blue rule. I like the symbolism of the crossed peace pipe and olive leave two traditional symbols of peace form two traditions. I also like the use of the native shield. 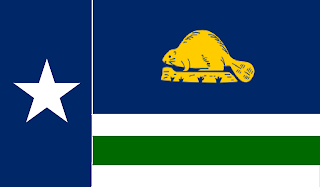 This flag keeps the beaver on the reverse of the current state flag. The white and green bars represent an old wagon road and is representative of the Oregon trail. The colours are also reflective of the Cascadia flag. 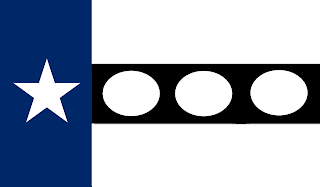 My first redesign for a Pennsylvania flag features a banner of the arms of William Penn, who was the state's namesake, receiving a large royal grant of land for a colony in 1661, which became one of the USA's founding 13 states. 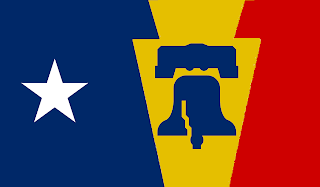 Another alternative design is blue and features the famous 'Liberty bell' inside the shape of a keystone reflecting the state's nickname. The yellow colour reflects the flags the Philadelphia Light Horse and the blue for the colour of the 1st Pennsylvania Regiment  and red for the flags of the 1st Pennsylvania Rifles and Hanover Assositaors. All were regiments in the US War of Independence. 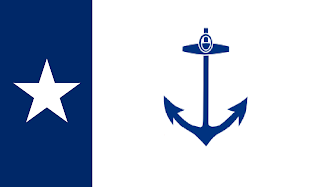 At first I thought the anchor was a rather generic symbol, however then I learnt that it featured in the seal since colonial times (1640s) and symbolises hope. I have based the flag on the flag of the continental army's Rhode Island Regiment. However blue and white was also used in the flags of other colonial Rhode Island units. 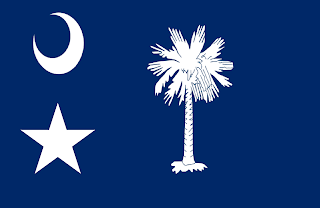 The South Carolina flag is probably one of the oldest state flags, being in uses in one form or another since 1775. I really only added a star in the hoist to bring it into the template design as I didn't feel it need any modification. 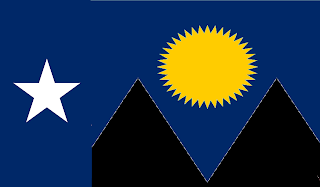 The sun has appeared in all South Dakota flags, the black triangles representing the black hills where the famous Mount Rushmore monument is. 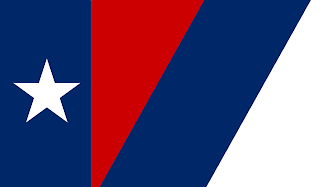 This flag is based on the 1897 flag, with the three colours representing the three main regions of the state, which is also what the stars on the current state flag also symbolise. 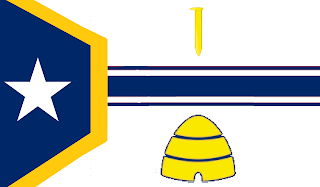 I've kept the bee hive form the current flag and seal. The two half hexagonal patterns in the hoist not only continue the bee theme (honey cone shape) but also represent the six states that border Utah. The blue and white stripes in the centre have a dual meaning. First they reflect historical Utah flags like the dessert flag, kimball/Maguire flag and Mormon God's kingdom flag  . It also reflects train tracks that symbolises the first transcontinental railway which was formed by two companies (Central Pacific Railroad and Union Pacific Railroad) that met at Promontory point, Utah. This is also represented by the golden spike which connected the rail lines of the two companies together, thus uniting the nations infrastructure and by extension uniting the states. 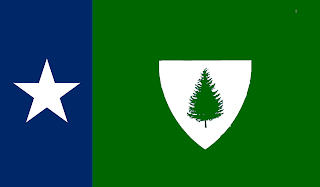 although I think the 'Green Mountain Boys' flag would make a great state flag it doen't fit the template so I took the tree from the current state flag and seal placed it on a white shield. The green field is in reference to the green mountain flag. 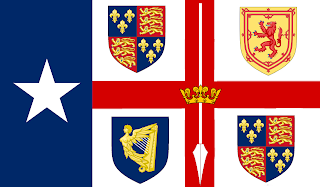 The St George Cross and the historic royal arms of England, Scotland and Ireland come from the coat of arms of the Colony of Virginia. The shield of which is still used in the arms of the Senate of Virginia but defaced with a gavel. Likewise I defaced the flag with the spear going through a crown taken from the current state seal. I also dropped the crowns from the individual shields. 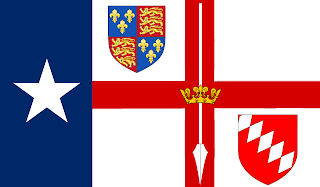 Although based on historical and current heraldry, I thought four shields made the flag too busy. So an alternative design of three shields is also available. The shields in question are the historic royal arms of England, which would have been used by Elizabeth I whom the state is named after, and the arms of Sir Walter Reighley who named and founded the first English colony in Virginia. 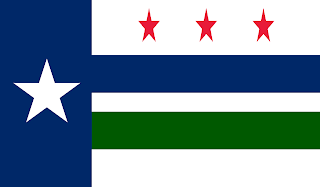 Based on General George Washington's coat of arms, but with the two red striped coloured blue and green in reference to the Cascadia flag to distinguish it from the flag of Washington DC. 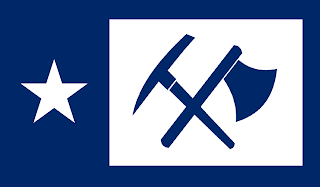 A white field with a blue border similar to the current flag. The crossed pic axe and axe are from the state seal and represent the farmer and the minor, in turn representing agriculture and industry. 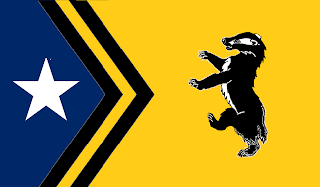 The arrow stripes represent the state motto 'forward' and reflect badger stripes. Badger being the state animal which is why the fly feature a rampant badger. 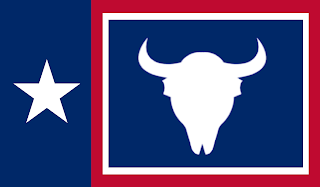 With the exception of the seal in the centre the Wyoming flag is one of the better state flags and I saw little need to change it. The only change I made (apart from removing the seal) was replace the whole buffalo with just the head outline. However this is just my personal taste and a full buffalo flag would also work well. 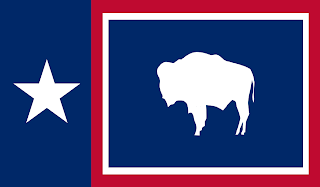 Well thats all the flags of all 50 United States redesigned to a standard template I hope you enjoyed them. Please feel free to comment
Posted by Sam McKittrick at 10:22 6 comments: