I was reading an article about a program aimed at establishing a human colony on Mars by 2023. In fact they have even begun the process of recruiting potential colonists, (or one-way astronauts as they call them)! The project known as Mars One does seem to be well planned out:

I admit I enjoy a little bit of science fiction from time to time, and would love to travel to Mars, but I am not too sure about living there permanently! You would need to either be very brave or crazy or both. But perhaps my contribution to Earth's first space colony can be a flag one.

My first design features a red flag (as Mars is the Red Planet this seemed appropriate). Towards the  hoist is a pair of hands which symbolise humanity. The hands are open, and holding the astrological symbol for mars (which is coincidentally the male symbol, which I think represents the shield and spear of the Roman God which the planet gets its name from). Inside this is the Astrological symbol for Earth the home planet of the colonists. 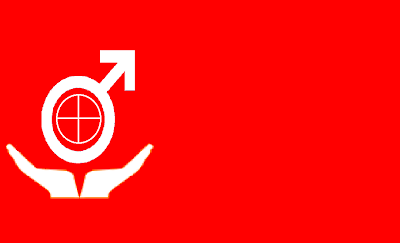 I did the detail in white so it stands out better on the red background. I also thought it might need a little more colour so I added some blue and green stripes (inspired from my Earth Flag design). Also symbolising the home planet. 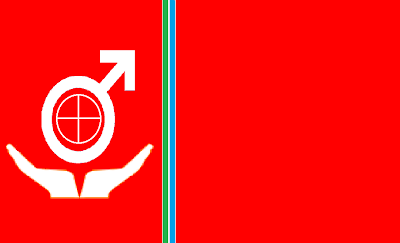 Or alternatively the stripes can be horizontally: 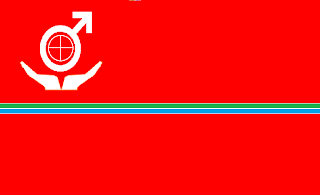 Let me know what you think of these designs. If you are brave (or mad) enough to sign up as a one-way astronaut or are just curious their website is here.
Posted by Sam McKittrick at 05:23 No comments: