With regional elections on the horizon this year I thought it might be interesting to do a post about the British devolved administrations. That is the regional governments of the United Kingdom who's powers are given (devolved) to them by the national parliament in Westminster. The devolved administrations are the Northern Ireland Assembly, the Scottish Parliament, the National Assembly for Wales and the Greater London Authority. I though it would be a good idea for the devolved institutions to use coats of arms. You could also include the governments of the overseas territories and arguably the crown dependencies as devolved administrations, however I am focussing on the United Kingdom administrations as the territories and dependencies generally have their own coats of arms.

First off I'll start with the Scottish Parliament, which although founded in 1999, is arguably the oldest of the regional governments with roots in the Estates of Parliament (the original parliament of the Kingdom of the Scots) founded in the 13th Century. The Scottish administration is the only one of the devolved administrations with the title of parliament, which is significant as that suggests where its constitutional authority and power comes from. The difference between a parliament and assembly is that a parliment governs in the name of the crown. (although you could argue the same about assemblies as they get their power from the UK Parliament who inturn get it from the crown) There are notable differences between how parliaments and assemblies operate the Scottish First Minister for example is the Keeper of the Great Seal of Scotland, whereas in Northern Ireland and Wales the Great Seal is kept by the Secretary of State of the NI/Wales Office who is a member of the UK Parliament rather than a member devolved Assembly etc etc. So as Scotland is a parliament who constitutionally governs in the name of the crown a variation of the Royal coat of arms could be used. This variant is already used by the UK government in Scotland:

As the above variant is already used I think the pre 1603 version could be used:

The full coat of arms including the order of the thistle, crest, supporters and compartment. The lesser arms simply being the shield.

I think governments even devolved governments deserve a proper coat of arms, and my proposal is influenced on the former arms and current logo: 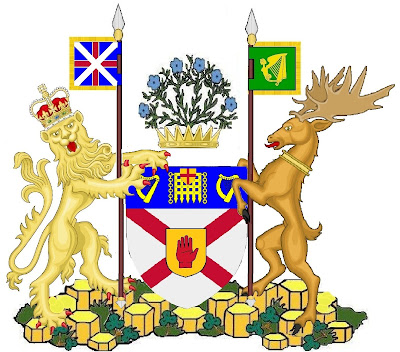 The shield features the cross of St Patrick which represents NI in the Union Flag. It is defaced with a gold shield bearing the red hand that is the traditional symbol of the province of Ulster, six of whom's nine counties form Northern Ireland. The chief is blue (the traditional colour of Ireland) and features a gold portcullis ensigned with the de burke arms flanked by two harps.  The portcullis is a British symbol of nobility that has evolved over time as the symbol of government and features in the badge of the national parliament. The gold shield with red cross is that of the Hibernio-Norman De Burke family, who as the medieval Earls of Ulster ruled the province. The harp on a blue field is the arms of the Kingdom of Ireland and used on the royal coat of arms and the arms of the Republic of Ireland. The crest features an antique Irish crown out of which six flax flowers are growing. This is open to interpretation.  The lion and elk supporters bearing the banners represents the two traditions of Northern Ireland. The lion wearing the St Edwards Crown represents those whose ancestors came from the island of Great Britain in the 17th Century plantation. The lion is the main national animal of the United Kingdom and the banner is a variant of the 1606 union flag. It has the St Andrew's Cross on top of that of St George, to symbolise the Ulster-Scots majority of the planters. It is also a flag of James I/VI who was the architect of the plantation, it is also to my knowledge the only use of this variant of the Union Flag in heraldry.  The Elk with the green harp banner represents those of gaelic-Irish descent. The Elk being an ancient Irish animal and the green harp banner being a historic Irish flag. It is first recorded being flown from ships of the Catholic confederation of the 1640s and was used as a defacto national flag of Ireland by nationalists and to an extent the establishment until it was replaced by the Irish tricolour. It is important to note that while these flags symbolise national identities, they are historic flags rather than current national flags, in fact neither ever had official status. The symbolism of the two supporters representing the two main traditions supporting the shield together is evident. The same animals are also used on the former coat of arms. The compartment as well as featuring shamrocks also features stones from the Giant's Causeway.

Wales does not have a coat of arms in it's own right, it does however have two royal badges that are used by government. The first one features a red dragon on a shield which is divided into the colours of the royal house of Tudor (green and white) and is what the current welsh flag is based on. This badge dates 1953 although it has older origins. It was originally used by the Wales Office and was used by the Welsh Assembly until 2008. It is still used by the Wales Office.

The second was approved in 2008 and is based on the historic royal arms of Wales, as used by Welsh princes in the thirteenth century:

As heraldic badges go I think these are pretty sound, although I would have them the other way round. (the historic royal arms used by the Wales office as its a UK government department and the draggon by the assembly). However if the Welsh Assembly was ever granted a full coat of arms my proposal would be something like this: 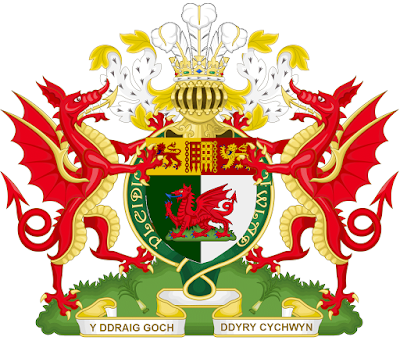 The shield is like the 1953 royal badge divided into the Tudor colours, and charged with the red dragon on a grass base. The chief is divided into gold and red with the lions in alternate colours from the royal arms, and a portcullis divided into alternate colours. The portcullis symbolising government and devolution from parliament. The crest features a medieval crown with the Prince of Wales' feathers symbolizing the country was historically a principality. The supporters are of course red dragons, because its the national symbol of Wales and because dragons are awesome. The base features leeks the national plant emblem. It also feature the mottos of the two badges. "the red dragon inspires action" at the bottom and "I am true to my country" around the shield, both in the Welsh tongue of course."

the Greater London Authority is the government of London both the 1 square mile City of London and the surrounding boroughs and districts, although the former has a great deal of autonomy. The GLA consists of the office of the mayor of London and the London Assembly. London is governed more like a province than a city, which given its size and population and the individual councils the boroughs (some of which have or claim the title of city) and districts isn't surprising. Historically this group of municipalities which together form London has been grouped into a "county" of London:

Then this was reorganised into a Greater London Council, with more authority than a county council: 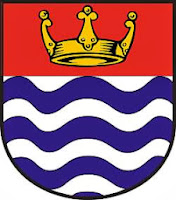 However this didn't last long and the GLA was set up in 2000. However it was never granted a coat of arms which is in contrast to the local borough councils. So here is my design for a coat of arms for the London government. 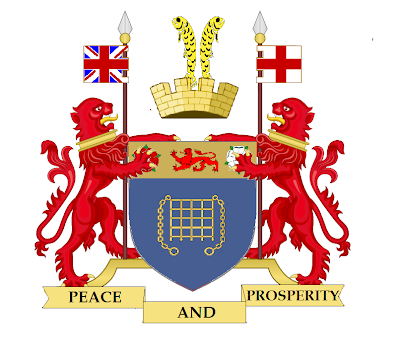 it is unchanged from an earlier proposal (primarily because I think its a good design). It features a portcullis which is not only in keeping with the theme of devolved assemblies, but has become a symbol of London itself being found in arms and heraldic insignia of institutions like the Metropolitan Police Service and the Army Reserve's London Regiment etc. The chief features a lion passant (like the London Council arms but in red) flanked by the lancastrian and yorkist roses which together form the Tudor rose, the floral emblem of England. The red lion symbolises strength and courage and the name "red lion" is also a popular pub name in the area. The lion supporters with the banners reflect London's position as the defacto capital both of England and the United Kingdom as a whole,

England at present doesn't have a devolved government and is governed directly by the UK parliament. This has led to instances of non English MPs from Scotland, Northern Ireland, Wales (and London) being able to vote on matters that only affect England. The government is seeking to redress this by giving cities greater autonomy (particularly northern cities like Liverpool and Manchester) and by introducing English blocking measures on English matters in committee stages of law making (although not in the voting chambour). This is rather thin stuff and a devolved English parliament or English regional assemblies, would in my opinion be better (it would also make the UK more like a federation). I have done two posts about regional and provincial assemblies. But if there is a hypothetical all England parliament what would it's coat of arms look like?
As its a parliament (and I have no doubt it would be given the title of parliament) a variant of the royal coat of arms could be used: 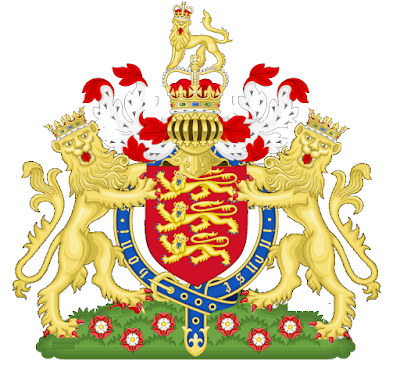 Like the Scottish Parliament it only uses the quarter of full royal arms relevant to it. (the three lion passants), this is within the Order of the Garter. It features the royal crest of England, has two lion supporters crowned with medieval crowns (although a St Edwards Crown would be no less appropriate I just didn't want four variants of the same crown in the one coat of arms) and the compartment/base features tudor roses.

This was something I was doing around the same time. I was originally working on an Irish variant of the royal coat of arms for use by the Northern Ireland Office (same way the Scottish variant is used by the Scotland Office). This was the result:

The shield is quartered so that the Irish arms are in the first and fourth quarter. The collar around the shield is also that of the Order of Saint Patrick. The crest revives the historic crest of Ireland not officially used since the Act of Union in 1800, using the stag emerging from a tower with three turrets. It also features an antique Irish crown although this is part of the crest rather than an actual crown.
But what about a royal arms for Wales? Well I had ago at that two: 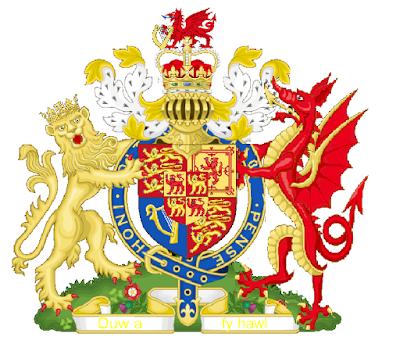 simple shield of the UK but with an inner shield with the historic royal arms of Wales. This is designed to give Wales the recognition it lacks and deserves, but at the same time taking into account it was never a kingdom as such. The motto is the same as the royal motto but in Welsh. It also has a dragon supporter and a dragon crest supporting a harp. (the harp is the national instrument of Wales).
Posted by Sam McKittrick at 07:12 1 comment: