Before I start this post I would like to apologize for my lack of recent posts, this is due in part to research and study for a print publication I am currently working on, and it is taking up the greater part of my spare time, so post might be few and far between I'm afraid, but I will try to put one up every now and then.
Currently British politics is dominated (with a slight exception of regional elections in Scotland, Wales and Northern Ireland) by the upcoming referendum on the United Kingdom's membership of the European Union. As usual I am not advocating any political opinion, but I was intrigued when I seen a hypothetical scenario. The scenario was the UK leaves and forms a free trade and movement zone, between the UK, Canada, Australia and New Zealand. with certain joint institutions, rather similar to the European Union but more anglocentric. I even seen a potential flag for such a union by Zach Elsbury:

It evokes the British ensign which not only includes the Union Flag but is the same style of flag used by Australia and New Zealand with a red field for Canada (the former flag of Canada was a red ensign). Its defaced with a shield quartered with the national plants of the four nations.
Inspired by this design I thought of having ago at a similar flag, with more emphasis of an international organisation rather than a colony. My first design was this: 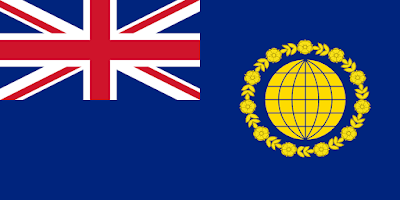 Still inspired by an esign which has elements all of the four member states flags have in common,The Union Jack has official status in Canada and the UK, and appears on the Australian and New Zealand flags. it features the gold wreath and a globe. The roses form part of the cypher which is in the centre of all the commonwealth royal standards outside the UK, including those of Canada, New Zealand and Australia. The globe is from the flag of the Commonwealth of Nations. This flag is timeless as it has no direct symbolism to any individual state, meaning if a member leaves or other realms like Tuvalu or Jamacia join the flag doesn't require changing. However thinking the globe might look a little like a mock up British Empire flag, I decided to replace it with a crown, the symbol of the monarch which share: 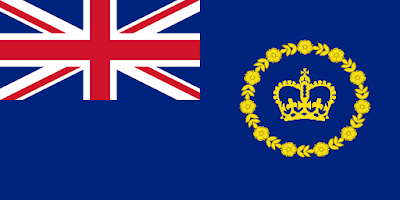 I like this better as it is a simpler design and looks a little less cramped.
Posted by Sam McKittrick at 09:59 2 comments: