The topic on weather or not Australia should change its flag form the traditional British Ensign is a hotly debated subject and political mine field in Australia. From what I have read most Aussies are content with their current flag for the mean time. Personally I like the Australian flag but if the Aussies ever voted to change it what would it be? 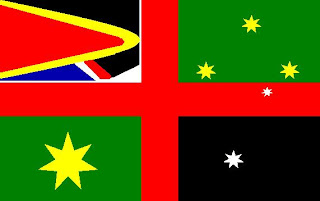 This was my original design. As you can see it has most if not all the characteristics of the current flag. The Southern Cross Star formation, Commonwealth star and a red cross similar to St George's Cross. It also has the Aussie Colours of Green and Gold. Native Aboriginal colours of red, yellow and black, and the British colours of red, white and blue. Two more aspects of this design is the boomerang shape with the aboriginal colours in the canton, and below that you can see part of the make up of the Union Jack, but not a whole one. These symbolise the two main Australian communities the ones descendent form Aboriginals and British Settlers.
Personally I thought this although interesting was very complicated. So I retired to studying the Australian flag.

The three main consonants of this is the British Union Flag in the Canton, the Commonwealth Star under it. This symbolises six Australian states and the seventh point is for all the Australian territories that aren't part of the mainland. Towards the fly is the southern cross star formation which can also be seen on the similar flag of neighbouring New Zealand. The bit on this flag that the pro-new flag people don't want is the Union Jack as this symbolises British Sovereignty, this is probably not surprising as Australia was part of the British Empire when this flag came out. However today Australia is fully independent so some people say the flag is out dated. Others say it was the flag Australians have fought and died under and link to their ancestors and mention that the Queen is head of state of Australia and other countries in the Commonwealth.
I decided to remove the Union Jack if only to see what it would look like without it. I didn't think it looked too bad. I moved the Commonwealth star up to the centre and it looked better. Then I thought about changing the colour. Green and Gold seemed the most appropriate. This was the result: 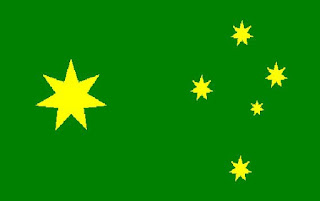 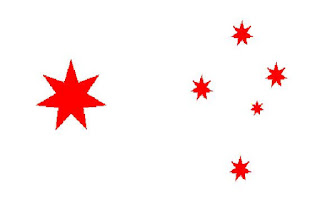 Alternatively the stars could be blue.
My friend Leonardo Piccioni from the Flags Forum also designed a version shown below:

This is the civil version he had the idea that the government version should include the Commonwealth star and the Civil one only the Southern Cross.  Me and another form user 26 May 1989 (who is Australian) think that although the Kangaroo is a great Aussie symbol it is rather Corporate which is not good for a national flag. Now the reason I included Leonardo's design is because I used it as a template for the next design: 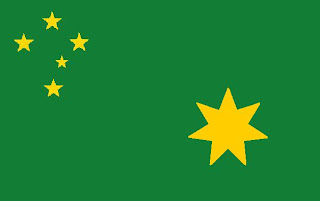 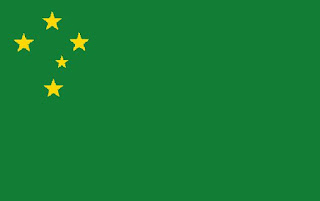 As you can see I removed the Kangaroo. In terms of colour the only colour this would change is white for the Navy, as at sea both Gov and Civil ships will use either the State or Civil versions. Although the Civil flag looks a little plain I think after use it would 'grow on you' but I think there are lots of alternatives that should be considered. to see the flags forum discussions on the subject click HERE

Back to NI flag another blog with ideas

There is a feeling that if Scotland votes 'yes' to independence in the 2014 vote then the Orkney and Shetland Islands would either remain in the UK or become independent of Scotland.
Looking at this from a creative point of view on the flags forum myself and others have been discussing designs for the flag of the 'Northern Isles country'
The two Islands groups are culturally and historically linked. They both share a mixed Viking and Scottish heritage and culture. I have even recently discovrerd my family name originates from the Viking settlements on the Northern Isles. There are also traces of Pict and Geal ancestry too.
Both the individual island groups have their own flags (both Scandinavian crosses)

I proposed of combining them into one in a similar way the Union Jack is a combination of flags:

Merchant ensign (if they remain in the UK)

This idea was picked up by Leonardo Piccioni who designed another perhaps better combination design:

I also thought about defacing the St Andrew's Saltire with a logo, symbol or coat of arms. I came up with the fallowing designs:

I also thought about topping them with a Scots Crown. The thing with these is that they give the impression of being part of Scotland (which they are at the moment) or they represent one culture identity or background(with the exception of the brooch which is not the best symbol) Leonardo suggested changing the field to white and the cross to blue as is done in the Novia Scotia flag. He made a St Andrews cross version based on this and a badge from 1969 commemorating the Island's transition to Scottish rule.

The cross still represents Scottish heritage and identity but is distinctivly different from the flag of the independent Kingdom of Scotland (again these are only if the Scots vote yes) and the ship represents Viking heritage. The discussion and designs are still going on to view them on the flags forum click here. To see a similar post on Leonardo's blog click here.
Posted by Sam McKittrick at 07:10 3 comments:

There have been a few designs for an "Earth Flag" none of them with any official status in any country. The UN flag is often though of as a good flag to use, in fact it was even suggested that it should be used instead of the USA flag when NASA first went to the moon. However it is still the flag of an international organisation and not the planet. many other designs feature globes and pictures of the Earth, which I think looks awful and would be inappropriate to put maps on flags. so here are my designs for an "Earth Flag."

My first design was based on the UN Flag with the wreath for peace, but the stars represent the continents and the male and female symbols represent humanity. 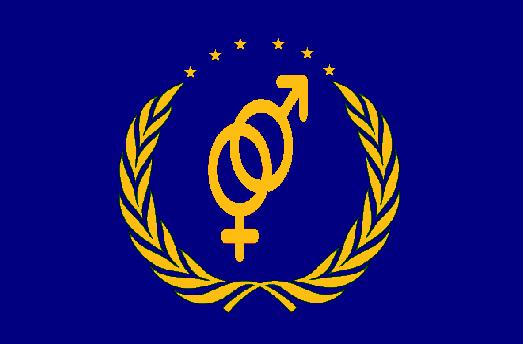 I personally was unsatisfied with this flag, so I looked for something to replace the gender symbols so researching I found every planet in our Solar System has an astrological symbol. The Earth's is a circle with a cross in it. These symbols have been used for thousands of years by many cultures and the individual conponants symbiosis different things in different cultures. Modern day its said to symbolise the globe (circle) and the four points of the compass (cross). So I incorporated this into my design. 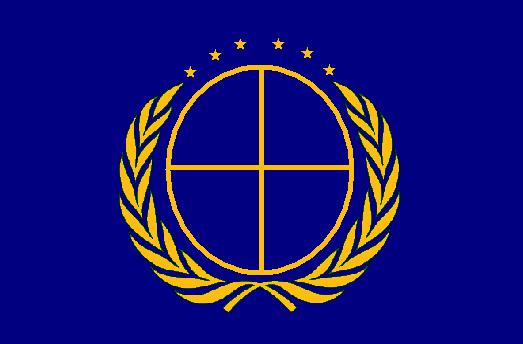 I also thought this looked too much like an international organisation flag particularly the UN. So I based another design on the land/sea ratio of the planet. This is simply a blue flag with a green field on the fly and the Earth Symbol. 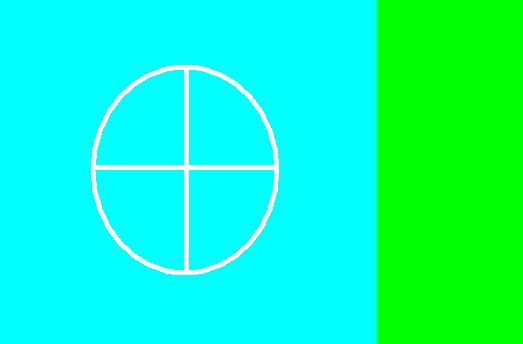 The reason there is more blue than green is because there is more water than land. I was also unsatisfied with this a put the green end at the hoist and the symbol so that it includes both green and blue. 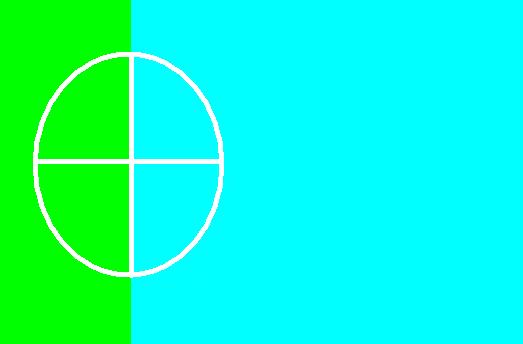 As the moon is supposedly claimed by man I also designed a moon flag. This is a black flag with a white disk over a blue disc symbolising the moon of Earth. In the canton there is an Earth Symbol symbolising its sovereignty to the Earth. 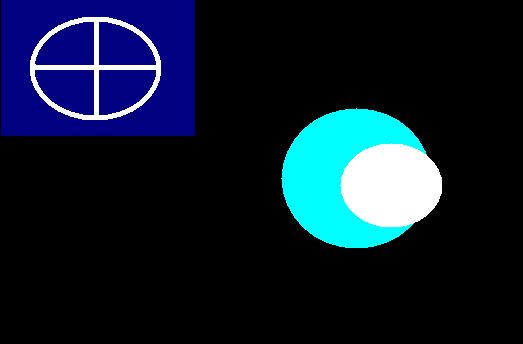