As of 2004 the Islamic Republic of Afghanistan is made up of 34 provinces. These are governed in a federal system with each province having a number of districts. Each province is represented in the government of Afghanistan by two members in the House of Elders. One is elected by the provincial council to a four year term while the second is elected by the district councils to a three year term. Representation in the House of the People is directly from the districts, although in each province, two of the representatives must be women. They are appointed by the President of Afghanistan.
Afghanistan has had more changes of its national flag during the 20th century than any other country in the world. It has had a massive 20 different flags since the first flag.
The current flag has been in use since 2001 and is similar to the one used between 1930 and 1973. The Black, red and green colours have featured on most flags. The official flag has the Afghanistan emblem in the centre:

Unlike most states which use a federal type system of government Afghanistan does not have sub national flags for individual provinces. I have designed some flags for a handful of the 34 provinces.

First up is the flag for the Province of Badakhshan: 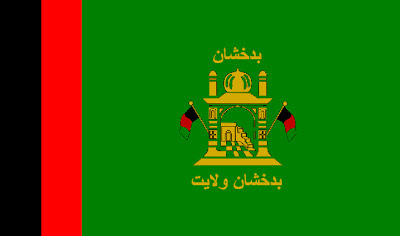 It features the national colours at the hoist, and a simple mosque flanked by two flags as appears in the national emblem, in the centre. The text above and below reads Badakhshan in Persian at the  top, and Pashto at the bottom. The colour green is most prominent as it represents prosperity and hope for the future and is often associated with the Islam Religion which is very important in Afghan society.

Next is the Province of Bamyan: 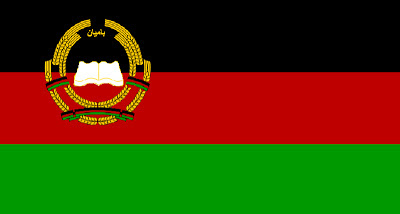 This flag is a horizontal tricolour in the national colours. This is one province for which I designed a seal, or emblem. It consists of a corn wreath (similar to national emblem,) banners like the provincial flag (horizontal tricolour.) The centre of the emblem has an open Koran the Muslim holy book. This symbolises the central role the religion plays in society. The top has Bamyan written in Persian.

Next is the Province of Daykundi in the central part of the country: 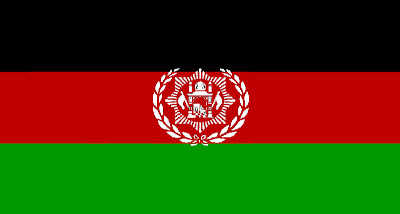 Next is the flag of Helmand Province: 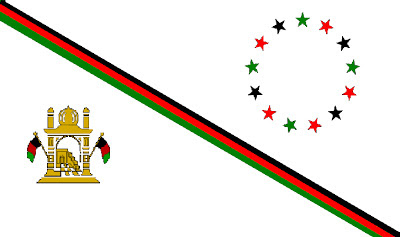 This flag is white with a diagonal black, red and green stripe dividing the flag into two fields. The bottom field towards the hoist has the mosque and flags from the national emblem. The second field has thirteen stars in a circle which represents unity and the thirteen districts of Helmand. The colour white represents pace. 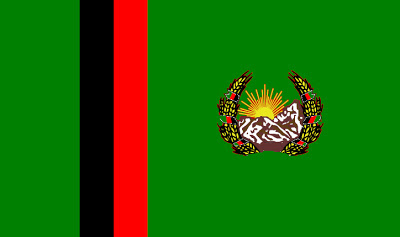 Like that of Badakhshan this flag features the national colours and a lot of green with the same symbolism.
The province emblem is based on and similar to the national emblem used between 1928-1929 by King Amanullah. It features the wheat wreath, and the sun rising over the mountains of Afghanistan symbolising the dawn of a new age.

Next is Jowzjan Province: 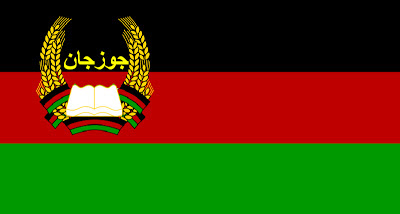 Again we see the use of the national colours in a horizontal tricolour. The province seal features a wheat wreath and banners. The Koran is at the centre of the wreath, and Jowzjan in Persian is at the centre. 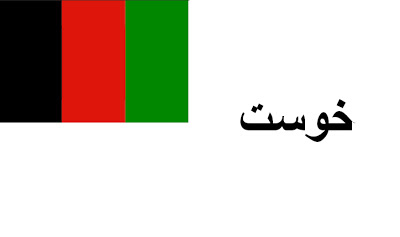 This is one of two ensign type designs, with the national flag (without emblem) in the canton. As there are so many provinces I thought perhaps a standard design might work. The white field symbolises peace and the name Khost is in Pashto.

The other ensign type design was Kunduz: 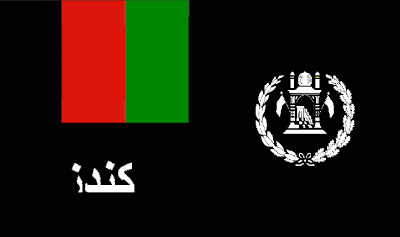 This is a black field, there are three reasons for this:
It features the mosque design of the national emblem in a laurel wreath for peace. Kunduz is in Pashto/Persian.

Next is Laghman Province 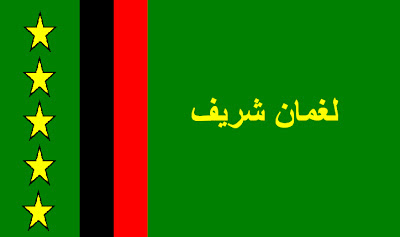 I have used this design with the five stars fairly frequently. The stars represnt the provinces five districts and the text reads Laghman in Arabic.

Nimruz Province is next: 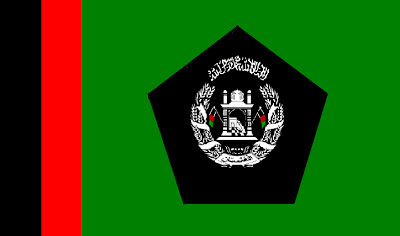 It features the national colurs at the hoist. Green is used a lot as mentioned before. The badge features the National emblem in a black pentagon. The Pentagon symbolises the five districts.

Panjshir Province is next: 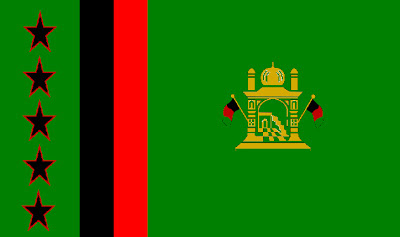 The common design as stated before. This flag features the mosque design from the national emblem. The five stars represent five districts.

Samangan Province is next: 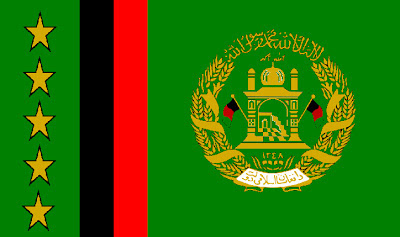 This design is used once more. It has the full national emblem in the fly. The five stars again represent this provinces five districts. 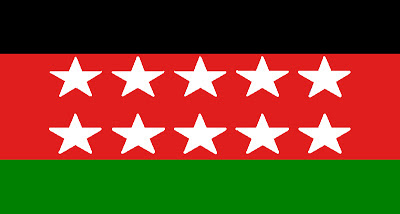 A horizontal tricolour with a larger red bar. The ten stars represents the provinces ten districts.

Next is Baghlan Provence: 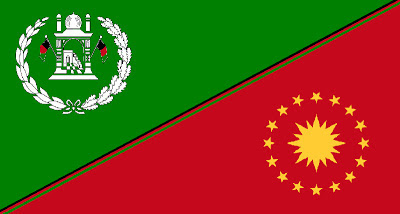 Last but not least is Farah Province: 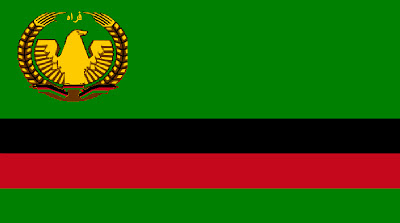 This flag features the national colours, and the province seal on a green field in the hoist. The seal consists of a wheat wreath, with a banner in the national colours at the base. The centre has an eagal which often features in Arab state symbols. Farah in Arabic is at the top of the seal.

All designs are mine except the national flag. These flags do not represent mine or any other political opinion or my religious viewpoint. All comments welcome.