Heraldry might not be something you would normally consider being associated with trains and railroads. But in Ireland there was a tradition among the railroad companies of having heraldic badges if not full coats of arms. This gave the Victorian companies a sense of tradition and history which they did not have (atleast not at that stage of history) which helped appeal to the often sceptical Victorian public. Some examples of historic company badges are below:

As you can see that these badges all have a heraldic influence if not a proper coat of arms. Some companies were granted arms, while others incorporated the arms of their destinations or the area the served into their badges. In 1949 the last coat of arms to be granted to a railway company in the British Isles were granted to the rail network of the Ulster Transport Authority (UTA), which ran Northern Ireland's state owned railroads, even though this was quickly replaced with a red hand logo. 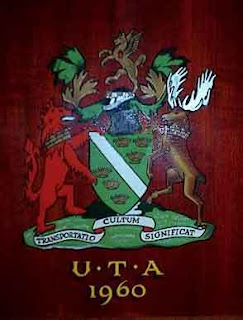 The green shield represents Northern Ireland, with a cornet representing each N.Irish county. The lion and elk supporters represent British and Irish links, and are rather similar to the supporters on the Northern Ireland coat of arms.The motto loosely translates to Transport means Civilisation, which must have raised some eyebrows as the UTA's trains were famously unreliable.
Since the 1960s the Railways of Ireland have been Nationalised, there are currently two main companies operated by both the Irish and Northern Irish governments.  Iarnród Éireann (Irish Rail or IÉ) and Northern Ireland Railways (NI Railways or NIR). Both these companies have logos and badges but not a coat of arms which I think is a great loss as I think a coat of arms would look far more attractive to passengers than a cooperate logo. There are also small private and heritage railways run by enthusiasts, museums and factories, but none of these are 'mainlines' or considered part of the national network so I won't include them in this post.

The first coat of arms I designed is for NI Railways, which is what the railroads of the UTA became when it was got rid of. However NIR is owned by the public transport company, Translink, which is in turn owned by the NI government so its still state owned. The current NIR badge is:

The badge is  a design of the companies initials 'N,I,R,' and is rather cooperate and unattractive. My design for a coat of arms is below: 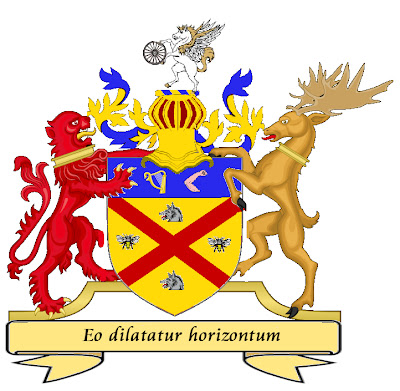 the supporters and crest come from the old UTA coat of arms reflecting the companies history. Although the pegasus crest has been changed slightly, to white and holding a locomotive wheel. I don't exactly know the origin or the heraldic meaning of the pegasus, but it does seem to suggest speed and elegance which are good attractive qualities for a railroad. The charge is St Patrick's blue with a harp for some national symbolism and a naked arm which symbolises industry. (NIR doesn't carry freight any more but it does feed local industry by taking a lot of people to their places of work so I feel its appropriate) The rest of the shield features a red saltire on the gold field. The red saltire reflects St Patrick's cross but I added the gold field as gold and red are considered the colours of Ulster and I think adds local significance. The Boar's head represents hospitality towards passengers and the bee represents industrial efficiency. I didn't add anything to represent counties or towns as the railway might expand or decrease so this way its relatively future proof. The motto "Eo dilatatur horizontum" is Latin and translates as "Travel broadens Horizons."

Next coat of arms is for the naturally larger Republic or Ireland network Irish Rail: 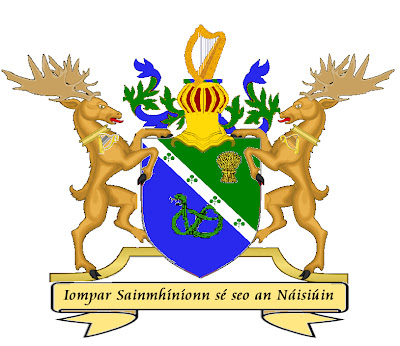 The supporters are two elks with harps on their collars as I don't see any reason to include British symbolism. The crest is also a harp the symbol of state. The shield has Irish colours of green and blue. The individual conponents consist of a Wheat Sheaf which in Irish Hearaldry symbolise fertility and a snake which in Irish hearldry symbolise fertility and renewal. This symbolising the fertility and renewal of the country because of its rail infrastructure. These conponants are seperated by four shamrocks representing the provinces.The motto "Iompar Sainmhíníonn sé seo an Náisiúin" is Irish for "Transport Defines the Nation."

The link between Belfast and Dublin is jointly operated by both companies. The express that operates between this is called 'Enterprise' and is jointly owned and has its own logo and livery which appear on the carriages. I also think a coat of arms is more attractive, so I made another one: 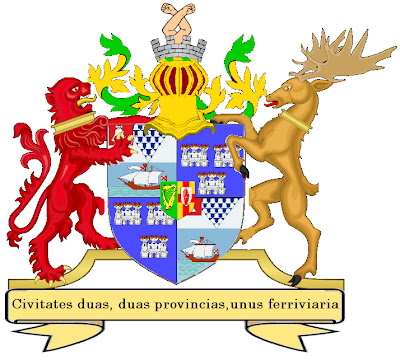 The shield is quartered with the arms of Dublin and Belfast, with the arms of Ulster and Leinster, the two provinces that the two citties are in. I have brought the lion back in the supporters for equality. The crest is a murral Corrnet with two arms representing the industry of the two citties which benifits from the cross boarder rail link. The motto is Latin and translates to "Two Cities, Two Provinces, One Railway."

I hope you enjoy these arms as much as I do, Feel Free to Comment.
All designs are by me except the first four which are historical.
Posted by Sam McKittrick at 15:30