The Home Rule debate was the most prominent issue in Irish politics in the late 19th and early 20th Centuries. Home Rule was an early form of devolution where an Irish Parliament would be established in Dublin to run domestic affairs, similar to the current Scottish Parliament. There are many reasons this was supported or opposed, many saw it as the beginning of the end of the union, so it naturally divided opinions and loyalties, often on tribal grounds. The Second Home Rule Bill passed the House of Commons in 1893 but it was defeated in the House of Lords. However following parliamentary reforms in the UK the House of Lords veto was limited to a two year delay. This meant that when the third Home Rule Bill passed parliament in 1912, it would not be implemented until 1914. This meant that over these years tension and division built up in Ireland, and by 1914 there were two rival armed militias opposing each other and threatening civil war. Naturally symbols, emblems and colours would play a part during this emotive time and none more so than flags. 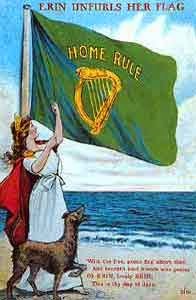 Flags are naturally emotive symbols, being visual representations of a group of people, be it a country or somthing else. This makes them particularly vulnerable to being political or propaganda objects, and it was as true in 1912 as it is today. The Propaganda posters and flyers on both sides often featured prominent depictions of flags. Pro Home Rule Nationalist posters favoured the green harp flag, while anti-Home Rule Unionists championed the Union Flag. These flags became degraded from national emblems to party political symbols for the two Irish tribes. As the top right flyer points out, there are two groups and two flags.
Interestingly Unionists seem to have employed flags more in propaganda posters than nationalists as there are greater amounts of Union Jack posters. In some cases flags appear to have been made up! The below poster depicts an Ulster flag and Ireland flag for the Ulster and Irish Unionists. The Irish flag is depicted as a white cross on a green field defaced with a white shield bearing a harp and crown. The Ulster flag is a white cross with green fimbriation on a red (or possibly orange) field bearing a red hand of ulster. 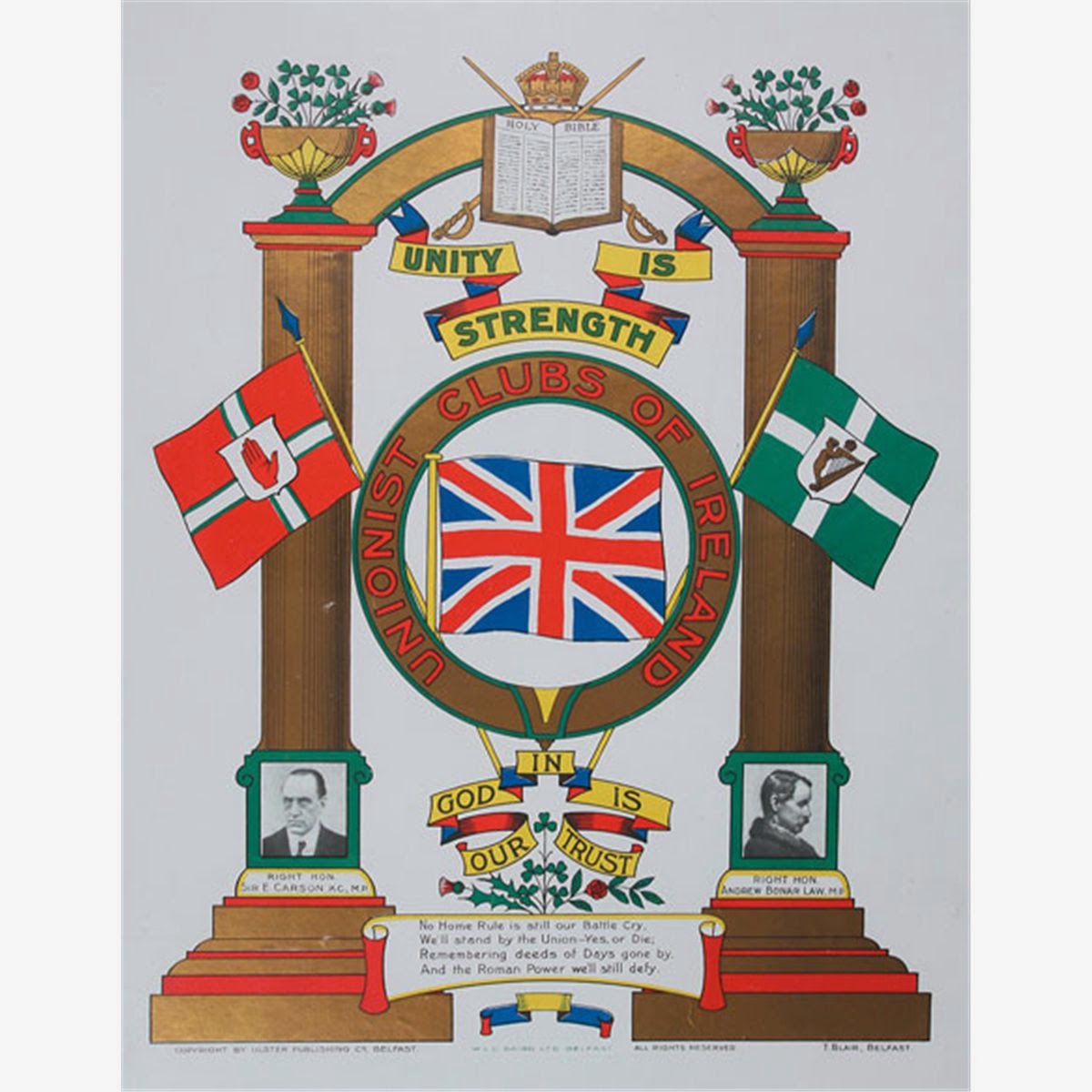 As the 1912 rolled on the Unionist call for action in response to the threat as they saw it only saw an increase in Union Jacks and it was used increasingly as the flag of liberty as they saw it in radical Unionist posters: 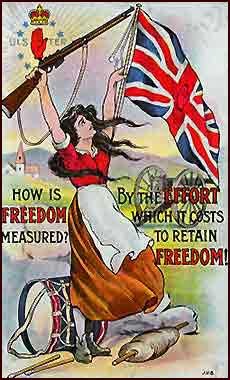 Union Flags could be seen all over the island, particularly Ulster in response to Home Rule, many were often very elaborate. On 9th April 1912, at a demonstration in Balmoral, what was believed to be the largest Union Flag ever woven was flown from a 90ft high pole!
The Unionist mobilisation was complete when on 28th September 1912 (Ulster Day) thousands signed the Ulster Solemne League and Covenant pledging to resist Home Rule by "all means... necessary." The Unionist Leader Sir Edward Carson led a procession to Belfast City Hall to sign the Covenant, led by the Boyne Standard, and signed with a silver pen on a Union Flag draped table. 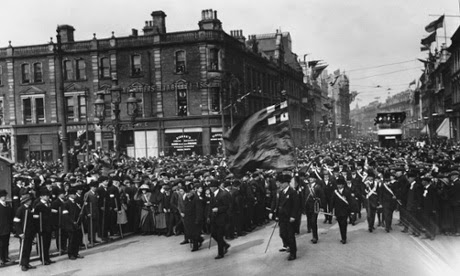 In 1913 the Ulster Volunteer Force (UVF) was formed to resist home rule by force if necessary. In response the nationalist party formed the Irish Volunteer Force (IVF). It appears that both of these militias took their inspiration from the Volunteers Corps of the 18th Century. The IVF even said "the banner of the Volunteers is waving after its century close furled on its standard." However for both sides this was little more than flowery language and both had very little in common (particularly flags) with the original Volunteers.
In May 1914 the Provincial Committee of the IVF not only authorised the carrying of unit colours but went as far as proposing a standard uniform design, to which every unit was expected to conform to. The decision was reached that each battalion of each unit was to carry two colours, a national standard and Volunteer colour. The national standard was a green harp flag, This flag had a canton on which a local/regimental insignia was placed. Below this the battalion number in Roman numerals was placed. The harp was the gold winged maid of erin design.
The Volunteer colour was to be blue, with a representation of the rising sun, the rays of which extended over the whole field (a rather oriental looking design). A regimental or local device, appeared on a shield in the canton. The roman numeral appeared on the sun itself.
The flags were apparently designed by a committee of historians. It was suggested they should be made of Irish linen and measure no more than six feet by seven feet square. (1.82 meters by 2.16). However it was decided that they should be three feet by three feet nine inches and made of silk or poplin.
A certain O'Rahilly a member of this committee seemed to be the prime figure in the designs of these flags. He explained in the IVF journal that the winged maiden harp, rather than a plain pillared harp was adopted on the advice of a Dr George Simpson, stating the green harp flag was "as matter of fact, the national flag of Ireland." Simpson said that the green harp fla was established "by history" as the national flag, and that the winged maiden harp was "identified with Ireland only" and dated from the thirteenth century and by placing this version of the harp on the national flag, it would avoid confusion with the arms of the Province of Leinster.
The O'Rahilly explained the rising sun represented "the coming of Lugh, the sun god of Irish antiquity, out of the kingdom of Manannan (the sea)" to "rescue" the island. He even went so far as to claim that a rising sun was on the ancient standard of Finn McCool! He didn't however mention the Fenians of the previous century.
Uniquely these colours had no text (except the numerals) this was because O'Rahilly who seemed to know a little about vexillology thought "wording of any kind is distinctly out of place on a flag."
The separate City and County units were given freedom to chose their regimental/local emblem. Use of Municipal coats of arms was suggested for most city units, but the following designs were suggested for the following units:

Many other unit colours appear to have adopted UVF related insignia as their central badge. The East Belfast Regiment for example, adopted the UVF badge in the centre of the Burke arms based on the flag of Ulster. Battalion numbers appeared in roman numerals in the flags canton.
Fortunately the civil war never materialised. In a sad irony of history the men and women of both Volunteer forces fought side by side for their various reasons in the first World War, many of whom never came home.