Firstly I would like to apologise to readers who have no interest in the Northern Ireland flags issues, as this is another post with more ideas. I strongly believe that my home country should have an officially recognised flag. I don't know what news has gone out to the outside world but in Ulster its been a rather extreme couple of weeks regarding displaying the national (UK) flag on Belfast City Hall and what is now spreading to parliament buildings too. The protests, public disorder and community and political tensions that have fallowed is one reason why I have been thinking up new emblems specifically for Northern Ireland, note I am not attempting to replace any national emblems either British or Irish but filling the gap for regional Northern Irish emblems.
Another reason is due to the result of the last UK census regarding Northern Ireland. Two-fifths (40%) of those who responded said they had a British only national identity, (personally I don't think there is such thing as to me British is a collection of English, Scottish, Welsh and N.Irish but that is irrelevant)a quarter (25%) had Irish only and just over a fifth (21%) had a Northern Irish only national identity.
Traditionally there were people who seen themselves as primarily British and Primary Irish, with Northern Irish being seen as a regional identity. But this enormousness rise of people regarding themselves as Northern Irish only also highlights the need for an officially recognised emblem.

My first thought was for a coat of arms. I broke a little from my usual designs as I didn't use my usual template and thus added some extra things: 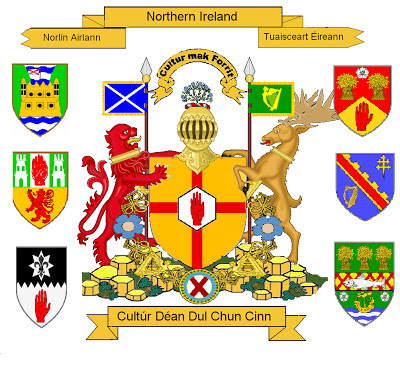 It is not a complete break with tradition as it still has the lion and elk supporters and flag staffs (although with new flags) from the old coat of arms. I thought it would be interesting if the supporters represented the two communities and traditions helping each other supporting the country. The lion represents the British, Unionist tradition, with St Andrew's Cross being used to symbolise this side of the community. I picked St Andrew's Cross to symbolise the Scottish Ancestry  and the Scottish aspects of the Unionist culture and identity. It is also the most used flag by unionism after the Union Flag and Old NI flag. It also shouldn't offend Nationalists as many nationalists also have close family and cultural links with Scotland.
The Elk represents the Irish, Nationalist tradition, with the green harp flag being used. This is seen as the secondary symbol of Irish Nationalism (Irish Tricolour being the primary one)  It was also used as an unofficial national flag for Ireland by Nationalists from 1798 to 1916. It also shouldn't offend unionists as green harp flags have been common among Irish regiments of the British Army.

The Helmet is a new addition and something I think was missed on past coats of arms. the Crest is the six flowers flax plant logo of the NI Assembly. The flax plant is quickly becoming the flower of Northern Ireland and is also present on coins and the badge of the Supreme Court of the United Kingdom. Although the shamrock is still present on the Royal coat of Arms and floral cyphers of the UK.
The chain is based on the Order of Saint Patrick and is displayed on the coat of arms in the same way the order of the thistle is used on the coat of arms of Scotland. This chain features flax flowers,  harps and St Patrick's Cross.
The base is the usual shamrocks and Giant's Causeway Stones.
the motto is "Culture makes Progress" hinting at peace and acceptance of each others cultures and traditions. It is in Irish Gaelic at the base and (Ulster) Scots at the top (normal in Scottish coats of arms) which are both recognised languages in NI and each associated with its relevant identity.
I also thought it would be nice to display the county coat of arms too. On the left from top to bottom are Counties: Fermangh, Antrim and Tyrone. On the other side is County Londonderry, Armagh and Down. The shield I will come to later. Of course the county arms don't need to be displayed all the time: 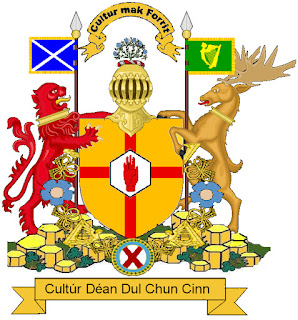 The shield I must admit is not my idea but that of Paul James from the Flags Forum who decided to use the Cross of De Burgh as seen on the Province flag on the NI flag, the hexagon was my suggestion as an alternative to the six pointed star as it could also represent the Giant's Causeway as well as the six counties. I have however altered it slightly so it is pointing to the top and bottom. A flag form of the coat of arms would be this: 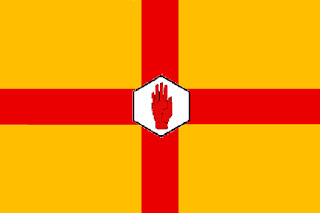 By Paul James altered slightly by Samuel McKittrick
I have also designed a 'Royal coat of Arms' for northern Ireland. Of course not everyone would support the monarchy but the fact that a lot if people have described themselves as 'Northern Irish' suggests they are content if not happy with the constitutional status. This coat of arms is designed to be used with Lord Lieutenants and other representatives of the Queen: 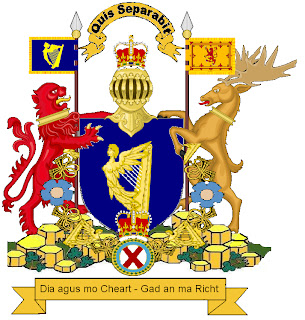 It retains most of the features of the Government/Civil coat of arms. The crest is replaced with a crown which is also on top of St Patrick's cross. The shield is a harp on Blue Field taken from the Royal Coat of arms, the banner of which is also being supported by the lion. The Elk holds the Royal Banner of Scotland because the Ulster-Scots population who would mostly support the monarchy see it as another link with Scotland. However I am not completely sure if I should use it or not. A banner of the civil coat of arms (the flag above) might be more appropriate, The motto at the Base is an Irish and Scots translation of the motto on the Royal Coat of Arms of the United Kingdom "Dieu et mon droit" (God and my right). The motto at the top is Latin for 'Who Shall Separate Us?' which appears on the Order of Saint Patrick, and is the motto of the Irish Guards regiment in the army, it also appeared on version of the last NI coat of Arms.
This is more for use of the representatives and institutions of the monarchy in Northern Ireland rather than the monarch herself. I would not be to keen on a separate version of the Royal Coat of Arms like what Scotland has. However if there is demand for such I propose the above design but with the Royal Arms of the three traditional British Kingdoms in the shield: 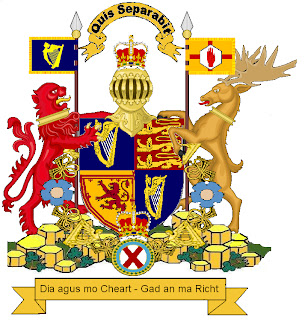 Of Course the Irish representation takes the dominant first and fourth quarters. As I stated above I was thinking of using a banner of the civil arms instead of the Royal Banner of Scotland. Well in this version I have no doubt that the NI banner should be used as The Royal Arms of Scotland is on the third quarter.

Paul James idea is that none of the other three UK nations have a banner of their coat of arms as a flag and that the red hand replace the harp in the UK coat of arms and Royal Standard:

By Paul James (note Wales is also represented in the fourth quarter)
I like his proposal. However I disagree with using the red hand as a replacement to the harp in the Royal coat arms as the harp is a symbol of Irish Kingship. But in the UK Government version of the coat of arms would perhaps be more appropriate.
I also see his point that the flag perhaps should not be based on the coat of arms for two reasons. Firstly this is not the case of the other UK nations and secondly this is what happened to the last flag, and when the local government was abolished in 1973 it ceased to have any standing. In order to survive political changes the flag should be separate from the government so an alternative I recently thought of is below: 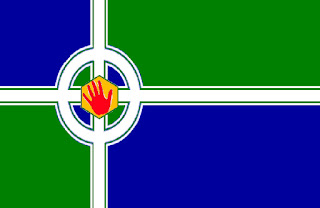 This flag is based on the NI Football colours (Green, White and Blue) The celtic cross design is also inspired by NI Football. The red hand is changed from the traditional upright hand to a child's hand representing the future. The Coat of arms remains the same as proposed above, but it is also a though a banner of it could still be used by the government as I quite like it. I have posted the Celtic cross design on  the new NI flag Facebook and so far about two thirds of feedback has been relatively positive.

All designs by Samuel McKittrick unless stated otherwise